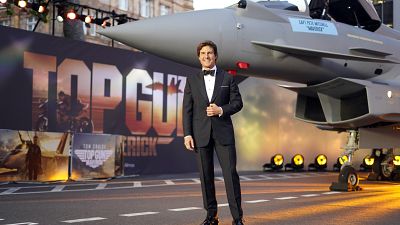 As 'Top Gun: Maverick' opens in cinemas across the world, film buffs are hailing it as the summer’s biggest blockbuster.

Even with a budget north of around €160 million ($171 million), the film’s release has felt different to the many tentpole action films released with similar budgets in recent years, according to a film expert.

In this comment piece, Dr Neil Archer, senior lecturer in film at Keele University, UK, discusses if the Tom Cruise action film will smash the boxoffice? Or if there is the air of an underdog about its release?

“It’s a hugely risky project,” Dr Archer. "It's hugely expensive. It’s a sequel to a 36-year-old film and it features a 59-year-old actor.”

The original Top Gun released in 1986 was a massive success despite launching to tepid critical reviews. Grossing over €330 million ($354 million) against its €14 million ($15 million) budget, the original made Tom Cruise an icon of 80s action films.

The film was so iconic that bomber jackets andaviator sunglasses soared in popularity. There was even a boost in enlistment in the US, with the Navy setting up recruitment tables at cinemas.

Much of the new film's promotion has centred on Cruise, who again stars as the leading role. In the build up to its release, his appearances at Cannes alongside Prince William and Kate at the London premiere made headlines.

But it’s been a long time since the era of a leading man like Cruise guaranteeing a film’s success, said Dr Archer.

In recent years, the 2017 reboot of 'The Mummy' starring Cruise garnered lukewarm responses and reportedly lost the studio as much as €90 million ($96.5 million).

“I wonder if it’s not so much about Cruise, but about Cruise’s Maverick,” Dr Archer suggests, referring to Cruise’s character in the Top Gun films.

“Cruise’s star power was so forged by that character as the world’s biggest star in the 80s. It’s hard to say whether it’s really a Tom Cruise movie, or if it’s Top Gun which Tom Cruise is part of. You can’t imagine it without him,” he says.

As a follow up to a 1986 film, 'Top Gun: Maverick' is reliant on plundering the currently vogue 80s revival trend in film, music and TV.

With examples like Stranger Things’ retro 80s aesthetic and Dua Lipa’s use of 80s era synths appealing to a demographic who never experienced the decade for themselves, is the film banking on a similar nostalgia for Top Gun?

Dr Archer notes that although the 80s is popular with a key demographic in their 20s, the reasoning may be with the group of people who experienced it first hand.

“There’s a generation that is coming into their 50s and they were teens when Indiana Jones and Star Wars reinvented the blockbuster,” he says. “Their frames of reference to older cinema are films like Top Gun. So the idea of a cinematic golden age has shifted to those kinds of films.”

It’s not just that many people reaching their 50s now consider the 80s as the golden era of cinema, it’s that these are often the people with a lot of capacity to steer society. Mark Zuckerberg even named some of the earliest Facebook servers Maverick and Iceman after Top Gun characters.

The way different eras of film influence the next often comes in cycles of taste. Films like Top Gun and the recent Ghostbusters reboots show a yearning for the films of the 80s.

When Star Wars and Indiana Jones came out, they may not have been reboots or sequels, but their reference points were from a similar cycle.

“Their cultural reference points were films in the 30s,” Dr Archer says. George Lucas was influenced by the adventure stories of H. Rider Haggard and the Western films of an era a similar amount of time before he was making films.

Relying on in-camera work with preconstructed sets and location shooting instead of CGI, 'Top Gun: Maverick' also has put the cinematic experience of practical effects at the forefront of its offering.

With many of the biggest films these days relying on huge amounts of CGI, Top Gun makes a clear statement of intent that it has a technological spectacle to wow audiences with.

Dr Archer argues this works against arguments the film is pure nostalgia as it’s not just a pastiche of the older film, instead it’s “a rethinking of it with current technologies.”

Another peculiarity of the current wave of legacy films is that the audience also gets to watch the stars of their childhood reborn in front of them.

Harrison Ford was 64 when the fourth Indiana Jones film was released. He was 72 by the time he returned in Star Wars. Even despite Cruise’s seeming incapacity to age in real time, the 59-year-old is clearly older than the 24-year-old who starred in the original.

“There’s an odd sense of looking at ageing actors which becomes a part of the film. We’ve grown up with them and now we’re entering a new relationship with them,” Dr Archer says.

The emotional effect of ageing with stars like Cruise and the spectacle of bringing a much-loved film from the 80s back suggests a Hollywood blockbuster that is also being comfortably targeted at an older audience, Dr Archer says.

All of this points to a potential studio belief that while TV and streaming have taken a lot of the more complex dramatic work, cinema is still the place for a luxury bombastic film event.

'Top Gun: Maverick' is exactly the kind of film cinemas are made for, with their booming surround sound and crystal clear huge screens.

Will it draw in enough of the older crowd with enough disposable income for cinema trips? Will it draw in a new audience of younger viewers? All this remains to be seen.

Although cinema audiences seem to be getting younger following the pandemic, a study by Digital Cinema Media, a UK cinema advertising company, showed that older audiences remain stable for certain films.

“When they’ve [Top Gun Maverick's production company] spent €160 million on a movie, they’re not cashing in. They’re banking a lot on this film at a time when the cinema audience is no longer relied upon,” said Archer.