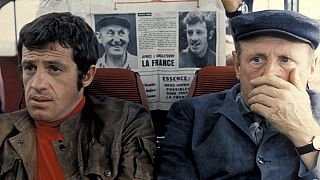 For the film of the week, there could have been new releases like Bodies Bodies Bodies, Both Sides of the Blade or Crimes of the Future, but the death of France’s enfant terrible was too good an opportunity to pass.

So, out with Halina Reijn’s Bodies Bodies Bodies, a fun slasher pic that doubles up as a nifty Gen Z satire; sorry to Both Sides of the Blade, Claire Denis’ decent but ultimately underwhelming relationship drama starring Juliette Binoche and Vincent Lindon discovering how we poison ourselves with the burden of things unsaid; and so long to David Cronenberg’s Crimes of the Future, a solid return to the body horror genre, which is not a patch on eXistenZ and would have worked much better as a miniseries rather than an overstuffed-to-the-point-frustrating ride into the world of art-surgery.

Not that the Film of the Week is Godard film, mind you.

The celebrated auteur changed cinema in his own way, no doubt about it – he was at the heart of the Nouvelle Vague and did contribute to a movement which saw a new post-war generation react against cinematic conventions of the past. His unwavering radicalism and healthy disregard for Hollywood can only be applauded. But even though it’s hard to be completely apathetic about the legacy he leaves behind, but let’s put things in perspective.

It also goes beyond his filmography. Godard outrageously declared cinema to be dead – whatever that means – and heartlessly upset Agnès Varda in the gorgeous Faces Places, something which cannot be forgiven. And what a lot of fawning obituaries this week may have bypassed is that Godard repeatedly made comments on the Shoah that were qualified by many as antisemitic, if not outright negationism.

As mentioned earlier this week, there are a handful of his films that are worth watching, mostly his output from 1960 to 1967.

As tenuous a link as it may seem, though, to mark the passing of Godard, let’s dwell upon a film starring Jean-Paul Belmondo, with whom Godard worked with on A Bout de Souffle (1960), Une Femme est une Femme (1961) and Pierrot Le Fou (1965).

Many see these two films as peak Belmondo, but there is an underseen masterwork of French cinema starring the much-missed French actor that deserves to be discovered and reappraised: Le Cerveau (The Brain).

Directed by French comedy master Gerard Oury after his back-to-back successes of Le Corniaud (1965) and La Grande Vadrouille (1966), Le Cerveau (1969) is a European caper comedy that sees Arthur (Jean-Paul Belmondo), a small-time gangster, escape from prison with the help of his best friend Anatole (Bourvil). He hatches a plan to steal $7 million in notes from NATO, which is moving its offices (and the money) from Paris to Brussels by train. But unbeknownst to him and his initially-unwilling partner in crime is that a peerless English thief known as “The Brain" (David Niven), who had previously succeeded in attacking a Glasgow-London mail train, has the same idea and is scheduling his latest heist on the same day, at the same time.

So, it’s France versus Britain for the bounty.

Rounding off the international cast is the great Eli Wallach (The Good, The Bad And The Ugly), playing a hilarious version of the villainous roles that had made his name: a Sicilian gangster scheming to double-cross The Brain in order to get the cash for himself.

What follows is a frenetic, laugh-a-minute heist romp that was conceived as a sly parody of the American films of the same genre.

Oury, benefitting from the clout and budget of his previous French box-office hits, embarked on this international project with Dino De Laurentis, with the aim to reach a larger audience. It was shot jointly in English – even if the film features French, English and Italian spoken throughout – and boasts some luxurious set-pieces that no European production could have dreamt of at the time.

There’s even a subtle bird-flip aimed at US exceptionalism in the final act, which features the French-made Statue of Liberty being shipped; it becomes a sly commentary on European filmmaking through the image of people reclaiming their money so it isn't sent to the “home of the brave.” The last line of dialogue even points towards a potential future heist so that the Yanks don’t get all the glory.

Godard may have distrusted Hollywood, but Oury only went and stole their money.

Everyone is game: Belmondo, Bourvil and Niven work brilliantly together – and while they all share top billing (Niven proving to be a reliably charismatic and confident polyglot), Belmondo shines brightest.

The leading man shows himself throughout to be unafraid (unlike the likes of his then heartthrob counterpart Alain Delon) of stretching his comic muscles. He is also unfussed in sharing the screen equally with his co-stars and proves confident enough to make a fool of himself. The indie darling was then at the height of his popularity and could have gone down the self-serious route; he chose to show off his terrific slapstick timing, and proved keen to orchestrate a send-up of the beau gosse image that was bestowed upon him following leading roles in Godard films, Un Singe en Hiver or Cartouche.

Le Cerveau is an absolute must-see, a vibrant, absurdist romp whose visual gags evoke the comedy stylings of Blake Edwards (The Pink Panther, The Party) and whose heist antics echo The Italian Job.

It proved to be a huge hit, tallying more than 5.5 million admissions and making it the second highest grossing film of 1969 in France, behind Once Upon A Time In The West. It remained Belmondo’s biggest box-office success until his death in September 2021.

So, for all those who will decide to revisit a Godard film following the announcement of his death, more power to you. A Bout de Souffle and Pierrot Le Fou are excellent, and Jean-Paul Belmondo is stunning in both.

But if you want to unwind with a hilariously anarchic Franco-anglo comedy that shows off the much-missed Belmondo at the absolute height of his powers, then Le Cerveau should be at the top of your viewing list. It truly deserves reappraisal, not least because its current kitschy appeal doesn’t overshadow its timeless comic brilliance.

Not sure Godard would have approved. But that’s maybe no bad thing.