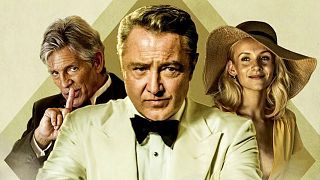 Part of a film critic’s job is to watch films and sometimes issue a warning so that others don’t waste their precious time.

This is that part.

For those of you who don’t recognise the name after reading it five times in a row, Flatley is the Irish-American dancer best known for Riverdance and The Lord of the Dance, and credited with reinventing traditional Irish dance.

Flatley plays Victor Blackley, aka: Blackbird, a highly skilled secret agent. When he fails to protect his wife from being killed by terrorists, he’ll retire, move to the Caribbean, and start wearing Humphrey Bogart’s wardrobe from Casablanca in order to deal with his grief. But when an arms dealer pops up with his wife-to-be (who happens to be one of Blackley’s old flames), it becomes clear that the Blackbird is going to have to resume all that superspy agenting that he did so well.

And before anyone asks, no, there isn’t any dancing.

Feast your eyes on the trailer, which speaks volumes – especially when you consider that a trailer’s primary function is to sell a film by picking out some of the best moments and editing them together to get punters to part with their well-earned cash.

Well, that's a fail. And it's only a fraction of the catastrophically inept litany of clichés you’ll be treated to in the mercifully lean 88-minute runtime.

Rainy funerals. A troubled veteran pulled back in for one last world-saving job, surrounded by younger swooning women out of his league. A sim card MacGuffin that holds a formula that can “kill millions of people.” Lines like “No one can do what he does” and “You’re the only one who can stop this.” A climatic face-off with Eric Roberts playing a crime lord that sees Flatley drop the line “Shall we dance?”.

And you should dance, Mr. Flatley. If ever there was a moment to state that life is so short that there’s barely enough time to get good at one thing, now’s that time. Stick with your tapping and pirouetting legacy, and don’t – whatever you do, Mr. Flatley – subject us to any more of your passion projects.

Even “passion project” is putting it mildly here. So is “irrepressible vanity project”.

When Tom Cruise, an action star of small-ish stature who knowingly lampoons his height by going up against adversaries that hulk over his 1.72m (as seen several times in the Mission: Impossible films), it works. He puts in the time, effort and sheer nutbaggery (as witnessed in his latest promotional stunt). When a self-serious and drunk-on-hubris Flatley knocks out a baddie twice his size, it’s plain hilarious. And not intentionally.

Flatley comes off like someone who has too much money, didn’t want to buy himself another car and decided to gift himself a spy genre vehicle in which he is a messianic action hero that’s stronger, smarter (and more sexually irresistible) than anyone.

This goes beyond a misguided vanity project. Blackbird takes self-aggrandising ego-stroking to a whole new stratosphere.

Flatley’s acting can be resumed to the rakish angles of his collection of trilby hats, and watching him fight, flirt or even deliver a line of dialogue is like witnessing a freshly birthed and pouting baby giraffe trying to desperately prop itself up on a frozen lake. It is genuinely impressive how awkward he makes everything look.

What’s worse is when you remind yourself that Flatley wasn’t just miscast. He wrote and directed the damn thing, knowingly elevating himself to the rank of superspy through a production company called Dancelord Pictures.

At the end of the day, this clueless bargain bin James Bond pastiche, clearly intended as a _Taken_-style vehicle for Flatley to show that Liam Neeson isn’t the only one who can do Geriaction movies, is 2022’s new low – the godawful benchmark by which all other films this year will be measured.

And that’s no bad thing.

Struggling to find a redeeming feature in Blackbird is almost part of the fun, and impressive in and of itself. And let’s face facts – they can’t all be Casino Royale, The Bourne Ultimatum, Mission:Impossible - Fallout or even Taken. Sometimes it’s good to have a palate cleanser to be reminded of the true talent of others, and the value of the films we can often take for granted or stupidly dismiss as being part of "lesser-genres".

So, if a deliriously terrible hate-watch that’ll make you want to re-evaluate all those spy thrillers you thought were sub-par sounds appealing, Blackbird it is.

But be warned – if you’re looking for the next so-bad-it’s-good cult film, look elsewhere. Blackbird is not Ireland’s answer to The Room – 2020’s Wild Mountain Thyme got there first. It will not leave you shaken or stirred – only catatonic.

Don't Spit On Me Darling - the chaos of 'Don't Worry Darling'