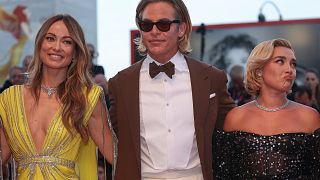 Even if you couldn’t care less about celebrity "scandals", let’s not pretend that the Don’t Worry Darling press tour in Venice isn’t your main source of gossip right now.

The drama surrounding Olivia Wilde’s psychological thriller, which had its world premiere at the Venice International Film Festival, is seemingly endless, with every day bringing another helping of behind-the-scenes mischief that is accumulating and overshadowing the film itself.

Confused? Here’s everything you need to know about the “scandal” in 5 key points.

It all started with casting.

The film stars Florence Pugh and Harry Styles as a married couple whose carefree existence in a utopian Californian commune in the 50s is threatened when she begins to suspect that there might be sinister underpinnings to their perfect lifestyle.

The male lead role, Jack, was originally supposed to be played by Shia LaBeouf. When he was fired, the role went to Styles, who has steadily been trying to make it in the talkies, with appearences in Dunkirk, Eternals and My Policeman.

Director Olivia Wilde and Styles started seeing each other during the filming of Don’t Worry Darling and sources claimed at the time that Pugh was not best pleased with the on-set PDA between the two, which was making everyone feel uncomfortable. Wilde had just split up with her longtime partner Jason Sudeikis and speculation was rife that Wilde and Styles may have had an affair.

This gossip was only buttressed by Wilde being served custody papers on stage at CinemaCon in Las Vegas in April 2022, quashing statements that the split was amicable.

Later on, in an interview with Variety, Wilde said that she fired LaBeouf, stating that his process was “not conducive to the ethos that I demand in my productions."

"He has a process that, in some ways, seems to require a combative energy, and I don't personally believe that is conducive to the best performances. I believe that creating a safe, trusting environment is the best way to get people to do their best work. Ultimately, my responsibility is to the production and to the cast to protect them. That was my job."

LaBeouf was sued in January 2021 by his former partner, singer FKA twigs, who accused him of sexual battery, assault, and infliction of emotional distress.

After Wilde’s interview, LaBeouf shared detailed correspondence with Wilde that contradicts the director’s version of events, and in a leaked video, Wilde seems to beg LaBeouf to stay on as Jack, referring to Pugh as “Miss Flo” (more on that later).

““I feel like I’m not ready to give up on this yet, and I, too, am heartbroken and I want to figure this out,” says Wilde in the video.

“You know, I think this might be a bit of a wake-up call for Miss Flo, and I want to know if you’re open to giving this a shot with me, with us. If she really commits, if she really puts her mind and heart into it at this point and if you guys can make peace—and I respect your point of view, I respect hers—but if you guys can do it, what do you think? Is there hope?”

Doesn’t quite fit with Wilde’s assertion of a “**no arsehole policy**”, and in the wake of the video leak, Pugh announced she would not promote the film with Wilde.

Florence Pugh also stated that she was tired of all the chat around the film’s raunchier moments and didn’t want Don’t Worry Darling to be reduced to its sex scenes.

On her side, Wilde was more than keen to talk about sex, telling Variety that only women have orgasms in the film.

Fair enough, but heavily selling your film based on sex might be seen as co-opting everyone's narrative and being a tad reductive.

In an interview Pugh gave to Harper’s Bazaar, she stated that when a film is “reduced to your sex scenes, or to watch the most famous man in the world go down on someone, it’s not why we do it.”

She continued by saying that it isn’t why she is in the film industry.

Come the day, and true to her word, Pugh was not there for the press conference in Venice. The official excuse was that her plane would not arrive on time, as she was flying from the film set of Dune: Part II, in which she plays Princess Irulan. A film in which Timothée Chalamet is the lead… and who was in Venice prior to her arrival for Bones And All.

Still, Olivia Wilde stated during the press conference that the supposed “feud” between her and Pugh was just internet fodder.

Things seemed to be calming down…

Not that the press conference didn’t have its fair share of meme-able moments.

Harry Styles came out with the gem: “You know, my favourite thing about the movie is that it feels like a movie.”

“It feels like a real like ‘go to the theatre film’ movie,” he continued. “The reason that you go to watch something on the big screen.”

Not the most exciting way of describing the film you’re attempting to promote.

As for Chris Pine, he looked like he was aching to be anywhere else but in Venice…

While Styles was blowing everyone’s minds with his hot takes, many went on social media to comment how Pine’s facial expressions were a sign of the actor wishing to separate his soul from his body.

When Florence Pugh did show up to the premiere, looking extraordinary on the red carpet, everything seemed to have calmed down.

She shared some laughs with Chris Pine, while many did note that Pugh and Wilde were never photographed next to each other.

Pugh’s stylist, Rebecca Corbin-Murray, further fueled the rumour mill that the actress and Wilde were still at loggerheads by posting a picture of Pugh with the caption “Miss Flo”, referring to the leaked video of Wilde being patronizing.

On Twitter, Corbin-Murray upped the shade by liking a post that defended Pugh and used the hashtag “TimesUpOlivia.”

Don’t spit on me darling

And now we reach the latest chapter in this never-ending saga of rumours, shade throwing, and now bodily fluids.

When it came to the premiere, Harry Styles allegedly spit on his co-star Chris Pine while everyone was being seated. Yes, you read that correctly.

Let’s face facts, any day at work when you’re being spit on by Harry Styles is not necessarily the worst day. But why do it at the premiere, in front of a packed cinema?

Is it because the seating arrangement did not allow Wilde and Styles to sit together? Is there a feud between Styles and Pine and SpitGate was press conference retaliation? Was it just an in-joke between the two? Or is this just fans projecting and wanting to manifest the rumours?

Spit or no spit - whatever the case may be, the moment was unfortunately caught on camera and that was enough to spark an internet frenzy.

Pine’s representatives promptly released a statement that denied Styles had spit on him:

“This is a ridiculous story - a complete fabrication and the result of an odd online illusion that is clearly deceiving and allows for foolish speculation. Just to be clear, Harry Styles did not spit on Chris Pine. There is nothing but respect between these two men and any suggestion otherwise is a blatant attempt to create drama that simply does not exist.”

Finally, Pugh did not make eye contact with Wilde during the four-minute standing ovation for the movie…

… and Harry Styles shared a kiss with co-star Nick Kroll during the standing ovation, making some reignite accusations that Styles is an **expert queerbaiter**…

This officially brings us up to date with this messy, messy drama.

Now that Don’t Worry Darling has premiered, it’s likely that things will start dying down, but what’s fascinating is how much the rumour mill has overshadowed and detracted from the film itself and simultaneously brought so much attention to it. It’s also hard at this point to distinguish between tabloid-like scrutiny and actual drama.

To cap things off, critics at Venice have given the film mixed-to-poor reviews, with many praising Pugh’s performance but criticizing the overall hollowness of the finished product and that the script's lofty ideas never materialize on screen.

So, will the drama derail the film once it comes out in cinemas on 23 September? Or will it bolster its chances of becoming an unexpected box office darling?

Will there be more social media saturation with further frame-by-frame analysis of SpitGate? Does it even matter at this point that the film features female orgasms and that it isn’t that good?

What’s sure is that everyone involved has singularly failed at maintaining appearances and properly promoting their film, and that _Don’t Worry Darling_’s longterm reputation will most probably be defined by its backstage shenanigans rather than its cinematography.

That and the fact that the title needs a comma after the word “worry”.