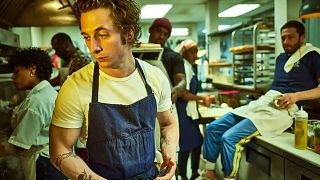 Like many people who write for a living, I’ve had a number of jobs that weren’t writing over the years. Without question, the job besides writing I’ve loved the most was working in the hectic atmosphere of a small high-quality restaurant.

In my time at this small south London restaurant, I worked behind the bar, front of house and in the kitchen. Perpetually understaffed, the tight team would run rings around each other spinning plates and multitasking to keep the place running.

At my current job, I only ever type one email, interview one person, or write one article at a time. At the restaurant, it wasn’t unusual to be shaking a margarita cocktail with my right hand while plating a burrata with my left.

Every shift was long, gruelling and resulted in me passing out from exhaustion at the end. As I said, hectic.

I often found it hard to describe to my long-suffering flatmates why I loved working in a kitchen so much. After months of my war stories of panicked rushes, tempers flaring and the drinking that followed, I understood how it sounded.

It’s why I’m so grateful for the new show The Bear for giving me the perfect means of explaining myself.

Now available in Europe on Disney+, The Bear is one of the best ways to succinctly explain life back of house. That’s restaurant speak for in the kitchen.

The Bear follows Carmen ‘Carmy’ Berzatto, played by Jeremy Allen White, as he returns from his life of fine dining restaurants in New York to take over his brother’s Chicago sandwich shop after his suicide.

Carmy is beset by ambition to turn the humble Chicago restaurant ‘The Original Beef’ into a restaurant befitting his Michelin star training. But the motivation behind his single-minded determination is also a swirling self-destructive method to avoid the infectious grief he and his family are refusing to deal with.

As The Bear creates more and more of a storm around the world as one of the shows of the year, it’s hard to move for articles describing either the hotness of lead Jeremy Allen White, or the stressful pacing of the drama.

Yes, The Bear is stressful. It’s basically an aneurysm that they’ve distilled into a watchable format. Forget smellovision, here’s cardiac-arrest-o-vision.

As much as the drama is heightened for the sake of drama, the importance of capturing the fast-paced nature of a kitchen is necessary to elevate the show from kitchen sink drama, to an accurate depiction of the workplace.

The stress peaks in episode seven, an incredibly well made one-shot episode that follows the shift from hell as endless takeout tickets come through the till and the staff collectively have a break down.

But while the stress of dishes dropped, knives thrown and insults spat is needed to communicate the atmosphere, it’s in every other detail that The Bear’s qualities marinate into your soul.

The central focus of Carmy and new recruit Sydney Adamu, played by Ayo Edebiri, to make the restaurant succeed is a synecdoche of the care and passion the creators of the show have put into it.

It’s in the minute details like the language used while working. “Backs”, “heard”, and “housekeeping” all the chefs shout, communicating in a way only people who have worked in a kitchen would know.

It’s in the camaraderie the characters feel between each other that when the shift finally finishes, grudges are put to bed and beers are shared.

It’s in the rich characters that populate the show. Although much of the drama is focused on Carmy’s working relationship with Sydney and his dysfunctional relationship with his family, one of my favourite scenes came later in and didn’t feature him at all.

Sydney invites Marcus, the restaurant’s pastry chef, round to bitch about work. In the middle of a show that leans on chaotic energy with gay abandon, it’s a quiet scene where the two characters discuss their passions in earnest.

It may be at the eye of a storm, but moments like that are where the depth of the show’s characters is undeniable. Without such a keen sense of character, the hurtling tension of the restaurant scenes wouldn’t work. They do, because we care about each and every character, their motivations and their turmoil.

Much like how a restaurant job haunted my dreams, with the echoing ding of the service bell tearing me from my slumber, the draw of the mayhem was infectious for a simple reason. I cared about making it work.

In The Bear, everyone in front and behind the camera clearly cares. It makes for a powerful watching experience.