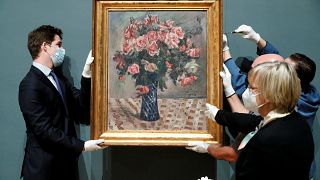 The painting has been on display for 71 years but has been subject to appeals for its original owners   -   Copyright  JOHANNA GERON/Reuters
By Tim Gallagher  with Reuters  •  Updated: 11/02/2022

A Belgian museum has returned a painting stolen by the Nazis to its rightful owners after 71 years.

Musees Royaux des Beaux-Arts (Royal Museums of Fine Arts) has returned the artwork to the great-grandchildren of a Jewish couple whose property was looted after they fled the country on the eve of World War Two.

The couple’s family are on a quest to recover 30 pieces of art which were stolen by the Nazis during their occupation of Belgium.

The Nazis were infamous for looting artworks and the consequences of their actions still reverberate today. Last year questions were raised over the provenance of 90 pieces on display in Switzerland’s biggest museum; Kunsthaus in Zurich.

The painting in question, of pink flowers in a blue vase by German artist Lovis Corinth, belonged to Gustav and Emma Mayer, who fled their Frankfurt home in 1938 to Brussels until their passage to Britain in August 1939.

The family's Berlin-based law firm approached the museum over five years ago and on Thursday, after a brief signing ceremony, workers took down the painting and wheeled it off to be packed.

"This is the first that has been really identified because, unfortunately, we have no images of the missing paintings," says lawyer Imke Gielen.

None of the Mayer’s nine great-grandchildren, who live outside Belgium, were present on Thursday.

The couple were unable to take belongings, including the 30 paintings, which were plundered by the Nazis. Along those taken were the expressionist "Flowers" painted in 1913 by Corinth, most of whose work the Nazis condemned as "degenerate".

After the war, Belgian authorities failed to establish to whom it belonged and entrusted it to the museum in 1951, where it has since hung.

Museum chief Michel Draguet said it had been easier to find the original owners of artworks in the case of Jewish families living in Belgium, because of the archives and contacts.

"Here, it was impossible even to know if this work is coming from Germany, from another country," Draguet told Reuters.

The museum, which appealed to the public in 2008 on its website for information on the painting, also launched on Thursday two rooms containing and addressing Nazi-looted art and works taken by Belgium during its colonial period.