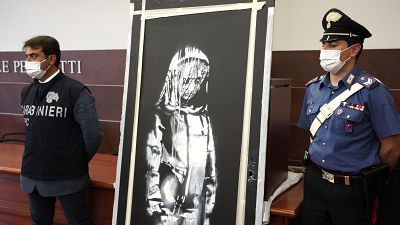 Eight men have been convicted in Paris for stealing a Banksy artwork that paid tribute to the victims of the 2015 Bataclan terrorist attack.

The suspects were found guilty of theft and handed prison sentences ranging from six months suspended to two years in prison.

The group removed the door of the Bataclan concert hall featuring the artwork in January 2019 and transported it to Italy.

According to CCTV footage, three masked men had cut the hinges off the door with angle grinders before loading it into a van with hidden plates, all in just eight minutes.

The artwork was later recovered by Italian authorities from an attic of a farmhouse in June 2020 and returned to France.

A fourth man described as a millionaire lottery winner took part in hiding it in Italy.

The mural of a veiled, mournful woman was created by street artist Banksy on the door to the Bataclan -- the site of a 2015 terrorist attack that killed 90 and injured more than 200 -- in June 2018.

Bataclan staff said that the theft of the painting -- a "symbol of remembrance" -- had left them with "deep indignation".

The judge in Paris stressed that "the stolen object" was "very particular" and "high heritage value," given Banksy's fame.

He also noted that the artwork had not been destroyed during the theft, despite prosecutors' calls for tougher sentences.