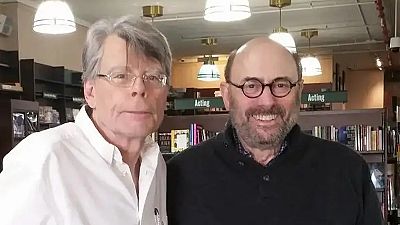 Peter Straub, the celebrated author of horror and supernatural novels and short stories, has died in New York City following a long illness. He was 79.

Straub’s books include ‘Julia’ (1975), about a woman stalked by a supernatural presence in the wake of her daughter’s death - a book that was adapted into the 1977 film The Haunting of Julia, starring Mia Farrow - and 'Ghost Story' (1979), following a group of men investigating the backstory of the female presence haunting them – also adapted to the screen in the 1981 film of the same name starring Fred Astaire.

He also achieved mainstream success with 1984’s fantasy novel 'The Talisman' and its 2001 sequel 'Black House', both of which he wrote in collaboration with Stephen King. Both books are connected to King’s series 'The Dark Tower'.

Straub won numerous honors including multiple World Fantasy and Bram Stoker Awards. He won the coveted Bram Stoker Award in 1993 for 'The Throat'; 2003 for 'Lost Boy, Lost Girl'; 2004 for 'In The Night Room'; and in 2010 for his last novel 'A Dark Matter'.

His daughter, novelist Emma Straub, announced his death on Instagram:

Emma Straub published 'This Time Tomorrow' this year, a novel which sees a woman wrestle with the decline of her father’s health. She said it was inspired in part by Peter Straub and his question, asked in jest: "What page do I die on?"

Stephen King posted on Twitter that “it’s a sad day because my good friend and amazingly talented colleague and collaborator, Peter Straub, has passed away.” He added that “Working with him was one of the great joys of my creative life."

Gaiman also tweeted that Straub was “Always kind, funny, irascible, brilliant. Once performed the Crow position in yoga, in a Milwaukee WI men’s room, because he was fearless & proud of his yoga. I’ll miss you Peter.”

Straub is survived by wife Susan, whom he married in 1966, and their two children.