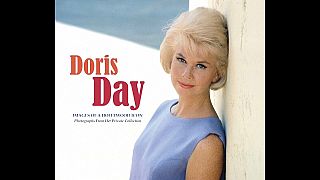 "Doris Day: Images of a Hollywood Icon" has been published to commemorate the late star's centennial.   -   Copyright  ASSOCIATED PRESS
By Euronews  with AP  •  Updated: 24/08/2022

Paul McCartney is among some high-profiled fans celebrating the widely beloved singer Doris Day's centennial in a new coffee-table book.

Day was 87 when she died from complications of pneumonia in May 2019. She would have marked her 100th birthday in April.

McCartney wrote the introduction to "Doris Day: Images of a Hollywood Icon," which features hundreds of rare and previously unpublished photographs from the late star's personal collection.

The British superstar has been "a big fan since he was a young boy in Liverpool," the book's co-editor Jim Pierson said.

"He watched 'Calamity Jane' in the cinema and all of Doris's movies. He loved her singing and he actually reached out to her some years ago and let her know that he really admired her.

"He met with her up in Carmel, where she lived, and they became friends and he would call and keep in touch and go visit her."

Others paying tribute to Day in the book include musician Michael Feinstein and Turner Classic Movies' host Eddie Muller. The book includes a photo of McCartney and Day, along with his daughter Stella, taken in 2017.

"I think probably the most poignant image in the book is when Rock Hudson went to visit Doris for the last time," Mr Pierson said.

"He was dying of AIDS and he wanted to show his support for Doris with her new pet show. And he went up to her home in Carmel. And you see the two of them walking around with her little dog, Biggest... And it was just a joyful finale of their wonderful friendship."

Never-before-seen images of the Beatles revealed in new book

Hollywood legend Kirk Douglas dies at the age of 103