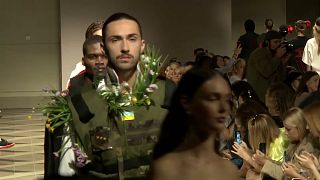 The unlikely but welcome topic of the war in Ukraine has been the theme of this year's 10th Central European Fashion Week in Budapest.

This year's festival was a nod to the art and culture of the war-ravaged country since its own fashion week can't take place.

Designers are using the platform to display the horrors of the nearly seven-month assault.

Dresses bear the names of cities where residents have died. Flowers coming out of body armour represented the soldiers killed in the conflict.

Fashion from Hungarian and Polish designers was also on display. Their designs reflect traditional Ukrainian culture as a sign of solidarity.

"This season, the Budapest Fashion Week communicated with Ukrainian Fashion Week that Ukrainian brands can present their new collections here to the international audience. This is very important because the Ukrainian Fashion Week was supposed to celebrate its 25th anniversary this September, but the war interrupted these plans," says Violetta Fedorova, the editor-in-chief of Vogue's Ukraine website.

Despite the constant threat, many feel the war has become part of their every day and creating helps.