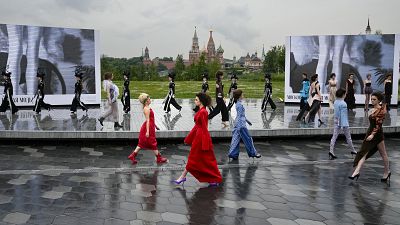 Moscow Fashion Week is underway and models and designers have been converging on the Russian capital.

More than 100 shows are to be held during the week, as well as talks from some of the Russian fashion industry's biggest names.

Among the attendees are Slava Zaitsev, Valentin Yudashkin, Alena Akhmadullina and Julia Dalakian, as well as many newcomers.

The fashion week comes less than four months after wide-ranging sanctions were imposed on Russia, including hundreds of foreign companies pulling out of the country.

French conglomerate LVMH has temporarily closed 124 stores in Russia, while continuing to pay its 3,500 employees.

The Spanish group Inditex, which owns the fast-fashion chain Zara, also temporarily closed 502 stores in Russia as well as its online sales.

Not content with just closing its shops in Russia, fashion brand Chanel has moved to prevent Russians from buying its clothes, perfumes and other luxury goods abroad.

How have Russian fashion designers been impacted by the sanctions?

Russia’s fashion sector is strongly dependent on imported goods. Most clothing and accessories are bought from imported brands.

"Our collections are made entirely of foreign materials, that is, there is nothing Russian except for the team. Everything else, from fusible (materials) to any button, any trim, sewing machines, there is nothing that we produce in our country," says Olesya Shipovskaya, founder of Lesyanebo.

Her brand is popular not only in Russia but also abroad, worn by Gigi Hadid, Natalia Vodyanova and Eva Chen.

However, there are still ways to receive foreign fabrics that can't be imported directly due to sanctions, says Yulia Skalatskaya who presented her new collection on Tuesday.

The sales of her clothing brand have increased recently, so she is optimistic about the future.

Skalatskaya believes that only hard work can help Russian designers survive in the new reality.

"If you only rely on the fact that some brands have left and someone's place has been vacated, nothing will change only because of them leaving," she says. "You need to work."