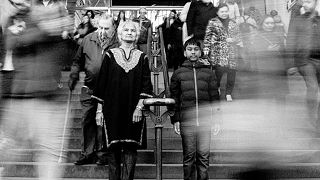 A new play will debut in London in September in recognition of the 75 years since the partition of India.

‘Silence’ will play at the Donmar Warehouse in London from 1-17 September before moving to the Tara Theatre on 20 September, and is an adaptation of journalist Kavita Puri’s book ‘Partition Voices: Untold British Stories’.

In 1947, the British Empire divided British India into India and Pakistan. Puri’s book featured interviews with British people who experienced partition 75 years ago.

A new play for old voices

In Silence, communal storytelling presents the shared history of Brits who lived through the final days of the British Raj when millions of people were violently uprooted in one of the biggest migrations in human history.

As decades pass and partition moves further back into history, Silence’s director Abdul Shayek speaks to Euronews, reflecting on why theatre is such a valuable way to evoke the past to fresh audiences.

“It enables an audience to look at things from the perspective of those who are on stage,” Shayek says. “In essence, stepping into other people's shoes and seeing it from that perspective.”

“Being able to present a story about partition using theatre enables us to do that, which I think has a huge impact because often when we talk of partition it’s something of a historical moment. We often disassociate ourselves from it. We say it's not something that has an impact or has any relevance to me.”

The legacy of a colonial past

The importance of bringing the stories of partition to a British stage is especially heightened by a reluctance for many Brits to reconcile India’s history as part of British history.

The separation of the British Empire from the UK today is an education blind-spot, suggests Professor Gurminder K Bhambra, a postcolonial and decolonial studies expert at the University of Sussex.

“If we think about the history or the way in which Britain is represented within the media, it's as if Britain exists as a separate entity. And the extent to which Empire is talked about, it's as if Britain, the nation, had an empire, which is separate from it,” Bhambra says.

One of the major themes Silence explores is the lasting impact the British Empire’s decisions had on the modern world today.

The British Empire faced instability after the Second World War and growing independence movements in many of its colonies led to partition. But instead of creating a unified India, as advocated by leaders such as Mahatma Gandhi at the time, the region was split into distinct states for the Muslim and Hindu populations.

The resulting migration of Muslims to Pakistan and Hindus to India resulted in an estimated 2 million deaths.

Bhambra also points out that the severance of India from the British Empire contributed to Indians and Pakistanis, even if they had British passports, not feeling welcome in the UK.

“There's a part of British society which often only thinks about partition from a very colonial perspective but understanding the lived experience and the stories of those who lived through that moment gives us another access point to that moment in history,” Shayek notes.

“I think the creative arts in educating the legacy of independence is so important. We’re not taught about partition in schools.”

“I am of Bangladeshi heritage. I was born in Bangladesh and the fact that I only really started to get my head around what happened and how I came to be a Bangladeshi until I was in my mid to late twenties is quite problematic,” Shayek says.