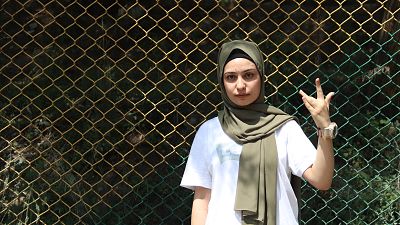 This month, India marks its 75 years of independence from British rule, with the consequences of the partitioncontinuing to resonate.

_Euronews Culture caught up with several women living in the Indian side of Kashmir to discuss how conscious rhymes from female hip-hop artists can emerge, face obstacles from simmering ad overt m_isogyny, and begin to thrive in a conservative country still wrestling with its recent and tumultuous past.

Srinagar and Baramulla, in the Indian union territory of Jammu and Kashmir.

In a bid to avoid heavy rainfall, Mehak Ashraf, 21, rushes towards a gazebo at a public-park, located in the Naseem Bagh neighbourhood of Srinagar in Indian administered Kashmir.

She fishes out a mobile phone from her pocket, while standing in one of the corners of the hexagonal structure, and plays a music-beat. The audio track is immediately followed by a few lyrics of her own voice, singing her upcoming song 'So Cold'.

“I will release this song probably in the last week of August,” Ashraf says.

Inspired by the rap output of renowned American rapper Marshall Bruce Mathers, commonly known as Eminem, Ashraf emerged in 2016 as the first female hip-hop artist in the region, under the stage name Menime.

Hip-hop in the Indian side of Kashmir emerged following the 2010 uprising triggered by the killing of three people by the Indian army in an alleged staged gunfight. 'I-Protest (Remembrance)', an English rap track sung by then-teenager Roushan Illahi, also known as MC Kash, went on to become the anthem for thousands of street protesters who came out on streets and demanded ‘Freedom from the Indian rule.’ MC Kash released the song in the memory of dozens of people killed during the uprising,

“I chose to become the voice of the voiceless after being inspired by the struggle of Eminem,” Ashraf told Euronews Culture. “The journey from an ordinary girl to Menime was full of struggles, as I had to face lot of criticism from my parents. But I did not lose hope and emerged as a well known female rapper in Kashmir despite all odds,” she says, adding that her stage name is Eminem's name reversed.

Ashraf tells Euronews Culture that her on-stage appearance made a large number of people angry. She was wearing jeans and t-shirt. As a result, she was abused and trolled for promoting ‘vulgarity and western culture’ in a conservative society.

“I did not bow before such people and took it as a challenge to perform in front of large audiences at multiple events in different parts of Kashmir,” Ashraf explains. “My courage inspired many young women to come forward and use rap as a medium to tell their stories.”

The emergence of female MCs

Rap music in the conflict-torn region remained confined to men for almost a decade. However, in the last couple of years, at least a dozen female MCs have come forward to narrate their stories through the genre that is enormously popular throughout Europe, America and many other parts of the world.

Anam Nassir, 19, known by the stage name Rapper Annie, dreamt of performing when she was a child.

“I learned about hip-hop when I was in 7th standard [Year 6, last year of primary school] and immediately realized that I can chase my dream only after I become a rapper,” says Nassir. “I started practicing the genre by watching videos on YouTube and released my song at the age of 18, so as to pay tribute to one of my friends who died in an accident.”

Nassir shares that the first challenge was to convince her father, who believed rap was not an option for girls in a place like Kashmir.

“My dad listened to me carefully and promised to support me after he realised the passion I had for the genre,” she says. “Nowadays, he accompanies me everywhere - in a studio during recordings or in ciphers [informal gathering of rappers, beat-boxers and break-dancers in a circle in order to jam together],” Nassir adds.

Nassir said that she is tuning her skills by practicing regularly and aims to become a high-profile female hip-hop artist. “I will move outside Kashmir in order to learn the tricks of the trade and polish my skills because I seriously want to pursue a career in rap,” she says.

Most of the male rappers, Nassir says, do not support girls like her because of insecurity and jealousy, as the songs produced by women rappers become popular. "Mostly women relate to the lyrics female hip-hop artists write, and only a handful of rappers who understand and appreciate talent support us. Others don’t want us to grow in the field of hip-hop.”

One of these allies is Ahmer Jawed, an established rapper from Kashmir. He believes that hip-hop is a powerful medium through which an individual can highlight many issues. He notes that there is a need for women to come forward to present their opinion in front of larger crowds.

“I feel like it’s needed. In our society, there are so many issues that they can highlight, and their perspectives are important,” says Jawed. “Hip hop is very powerful, as it allows you to express yourself, your struggles, and I think female rappers need to speak up. Women face a lot, and their voices matter,” says the rapper, who is believed to be the face behind the revival of conscious rap in the region - especially since the 2019 release of his album 'Little Kid Big Dreams' in collaboration with India-based independent label Aazadi Records.

Iqra Nissar, 14, aka: Yung Illa, has sung over ten tracks since her debut last year.

Currently, she is the youngest female rapper from her hometown in north Kashmir’s Baramulla district.

“The first song I produced was against sexual violence,” Iqra tells Euronews Culture. “I too faced opposition from my parents, especially my dad, but with time he backed me and allowed me to become a rapper,” she says.

Iqra claims that she never misses an opportunity to be in ciphers because it helps her understand how much effort she needs to put in to become a professional rapper.

“I like other female rappers. I'm a self-taught artist. I used to write lyrics when I was just seven or eight years old,” she says. “I have improved my writing and singing skills and hope to make more improvements with time because I have chosen to make rapping my career.”

Iqra says that while there is abuse, a large number of people support her. She prefers to focus on the positive comments she receives.

“The support and prayers by well-wishers help me to move on,” she shares. “I promise each and every abuser that one day they will shower praises in my favour and will be proud of me.”

Muheet Ul Islam is a journalist and a filmmaker based in the Indian side of Kashmir. He holds a masters degree in Convergent Journalism from Central University of Kashmir.

Nawsheena Mushtaq is a writer and researcher based in Kashmir.