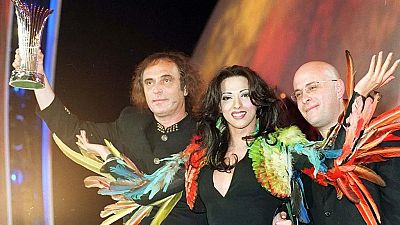 Svika Pick, a national treasure of Israel's music industry who gained international attention after his song won the Eurovision Song Contest in 1998, has died at the age of 72.

The cause of death has not yet been announced.

Pick, known as “the Maestro” in Israeli pop circles, was a singer, composer and prolific songwriter who penned dozens of No. 1 hits.

After news of his death broke Sunday, Israeli radio stations cut off regular programming to broadcast his music.

Born in Wrocław, Poland, in 1949, Pick immigrated to Israel at a young age and quickly became the vocalist in bands. He officially began his musical career on stage with a role in the first Israeli production of the musical “Hair”.

Throughout the decades, he became a mainstay of the Israeli music scene, with his androgynous, David Bowie-esque fashion style, which created a stir at a time when the country's performers and audiences were more conservative.

Among Pick’s best known tunes was 'Diva', written with the lyricist Yoav Ginai, for the 1998 Eurovision Song Contest. It was performed by transgender singer Dana International, and the song won the competition that year.

In a statement, Dana International called Pick “an Israeli cultural icon. A trailblazer. A gifted composer. The king of Israeli pop.”

Pick competed seven times in the Israeli preselection for the Eurovision Song Contest and wrote other Eurovision songs, including the 2002 Israeli contender ‘Light a Candle’ for Sarit Hadad (also written with Ginai), and a song for both Israel (Harel Skaat) and Georgia (Sopho Nizharadze) in 2010.

“He was a revolutionary artist of his generation, one of the pillars of Israeli pop. Tzvika passed away today, but the songs and melodies he left behind will continue to be played for many years to come," Lapid said.

President Isaac Herzog said Pick had “breathed new life into Israel’s cultural landscape and brought about a revolutionary change to it. His music penetrated our hearts and became an integral part of the soundtrack of our lives.”

Which UK cities are in the running to host of Eurovision 2023?

Is Eurovision coming to Latin America?