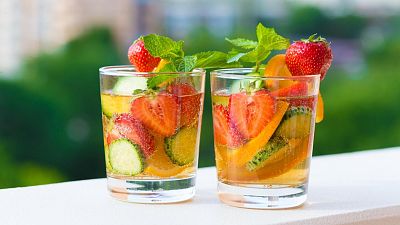 This summer has become depressingly synonymous with burningly unpleasant heatwaves.

While one reaction to this year’s warm-front is to curl up in a ball and fear the impending climate apocalypse, another is to get good and properly drunk.

Now, we cannot in all good conscience recommend such action as we urge all things in moderation, however some of us in our Culture Corner have been been mulling over some of the ways Europeans have historically quenched their thirst as the mercury rises.

Summer drinks vary wildly across the continent, but the iconic feeling of sipping a cocktail on a hot day is universal.

Pimm’s is quintessentially British. But where did the legendary tipple come from?

James Pimm came up with the drink in 1823 as a digestive to accompany the food at his oyster bar in London.

Served as a “cup”, the original drink was a mixture of gin, sweet vermouth, curçao, maraschino, and bitters; all mixed with fizzy lemonade and topped with borage flowers. The original combination emitted “a cucumber aroma and palate,” explain cocktail experts Anistatia Miller and Jared Brown.

“Fruit of the seasons were opted for when borage was not available,” they add, which birthed the traditional form of the drink today with strawberries, mint and orange often added to the glass.

The drink's popularity throughout the late 1800s led to its commercialisation as a bottled drink in 1912.

Pour Pimm’s and lemonade in a tumbler filled with ice. Garnish with borage leaves, mint leaves, orange lemon, strawberry. (Note: Because borage leaves are not commonly available, a cucumber wedge is frequently substituted when served.)

Eat with: A summer pudding with berry fruit and bread will provide a “contrast of tang from the fruit and sweetness of the Pimm's”, suggests School of Booze founder Jane Peyton.

French flair and simple style. For some, the country is unrivalled when it comes to creating culinary delights and many regard France equally as a champion in the drinks department. You can pick various delights ranging from Rosé to Pastis but we've chosen a relatively new concoction, the Kir Royale.

The Kir Royale was invented after the Second World War by a priest called Félix Kir. When Kir became mayor of Dijon in 1945, he wanted to promote two of the area’s local libations: crème de cassis, a sweet blackcurrant liqueur, and the highly acidic Bourgogne aligoté wine.

“Because aligoté is not to everyone’s taste and has limited availability outside the Dijon region, Champagne was adopted as a replacement,” Miller says.

The Kir Royale was born.

“We make our own crème de cassis at home thanks to having too many blackcurrant bushes in our garden. And instead of using Champagne, we prefer to give the drink a true flavour of Dijon by pouring Crémant de Bourgogne instead,” Brown says.

Eat with: The classic French way is to have this before a meal. Whatever’s for dinner, a Kir Royale will certainly hit the spot as an appetiser.

The word sangria literally means “bloodletting” in Spanish and Portuguese. But don’t let the gory name put you off; it’s been in use since around 200 BC, when Romans used the term to refer to red wine and wine punches from Spain.

“What is known is that it can be traced as far back as many punch drinks, which were imported from Asia during the 1600s and 1700s. Spanish and Portuguese traders were the likely perpetrators to combine their home riojas and douros with the fruits of the season - stone fruits, berries, and citrus fruits - and brandy or rum.”

“We prefer Spanish aged rum and a splash of sparkling water to give the drink a bit of lightness,” Brown suggests.

Eat with: Sangria goes perfectly with a tuna salad, suggests Peyton. “The tannins in the wine cut through the texture of the tuna.”

The Aperol Spritz is by far the most internationally popular version of this ubiquitous summer cocktail, but Aperol wasn’t the first drink to make waves in Italy.

That honour goes to the Italian bitter aperitif called Select.

Created in 1920 in Venice, Select was combined with northern Italian sparkling wine from Prosecco and a splash of sparkling water to make the original Spritz Veneziano.

“This refreshing blend then went through a few variations. Campari is sometimes used and more recently Aperol Spritz has become the most globally popular blend,” explains Miller.

If you can get a hold of Select though, it’s definitely worth substituting it in for the Aperol.

How to master the mix:

Eat with: Smoked salmon. “The bitterness of the aperitif works well with the oiliness of the fish,” according to Peyton.

Istanbul's Basilica Cistern is open to the public once more