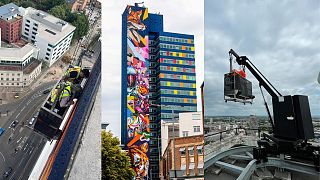 Last year Wing Lo left his job as an electrician to pursue his passion as a full-time visual artist.

However, hanging from a crane as he tried to paint a mural 82-metres above ground, he may have been having second thoughts about his career change.

“You’re constantly worried about the height. It is scary, there is no easy way about it.”

Lo was part of a five-strong team of artists who climbed into a cradle every day for a month to work on a giant, 82-metre tall artwork which now decorates St George’s Tower in Leicester, UK.

Lo and fellow artists Richard Peacock and Leigh Drummond were assisted by Ben Edwards & Kiene Tuckley to create the colossal piece, which is now the tallest mural in Europe and broke the UK’s previous record by almost double.

The mural is the third tallest in the world, only surpassed by paintings in Calgary, Canada and Karachi, Pakistan.

“It’s hard enough trying to paint a building but creating a piece of art work on that scale is not an easy task,” says Lo.

“Usually I would be stepping back quite a lot to check if it is going to plan, but you didn’t get that luxury.”

What is the new mural in Leicester of?

The Blue Tower mural is the brainchild of local art collective GraffWerk, who have created art over the city, which sits near the centre of the UK.

While Leicester is famous for being the home of package holiday inventor Thomas Cook, and boasts the car park where the missing body of King Richard III was discovered, it does struggle with a problem common to British urban space.

“We are mindful that UK cities can be quite grey and we’re keen on adding a splash of colour,” says Simon Jenner Director of BID, a group of 700 businesses which are dedicated to brightening up Leicester and funded the project.

The mural depicts symbols and iconography which are deeply meaningful to the city; a tiger for Leicester’s world famous Rugby Union team, a Fox for its Premier League-winning football team, an astronaut for the city that hosts the UK’s space centre, and DNA to mark Leicester’s role in the discovery of the secret of life.

Perhaps most prominent for the artists and funders is a symbol to mark Leicester’s diversity; the city is made up of a milieu of ethnicities and reportedly hosts the largest Diwali celebration outside of India.

The pertinence of the images for the area was in part enabled by the artists.

“The thing that is completely unique about this project is it is all local artists, all five artists come from Leicester and the images are meaningful and have significance for people who live in the city,” says Jenner.

Leicester already boasts a cultural quarter and museums to tempt visitors in and the market town can now add a world record to its cap.

It’s an achievement that didn’t come without sacrifice; Jenner was quick to commend the artists, who worked in rain and shine to deliver the impressive painting.

“The artists have had to be really brave and quite courageous at the height we are talking about,” says Jenner.

“We are hoping people will want to come and it, it is one of the most amazing street artworks we have in the city."

But does Lo - who says his humble beginnings spraying graffiti as a teen gave him a taste for thrill seeking - think it was worth a month dangling from a crane?

“Funnily enough when you start painting all your worries drift away really,” says the artist.

“It was difficult but a good challenge in the end.

“Me and the other artists are proud of what we have done, and proud to leave a legacy behind.”