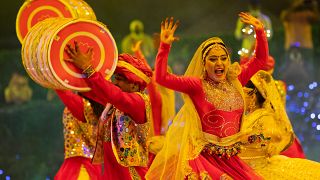 With a population of 2.75 million Indians equalling 27.49% of the UAE’s population, the Indian community represents the country’s largest demographic. Diwali – India’s biggest and brightest holiday celebration, the festival of lights – is a major event on the Dubai calendar.

Despite the pandemic, revellers of all nationalities gathered across the emirate to join the Indian diaspora in celebrating the occasion.

Observed by Hindus, Sikhs and Jains, the festival is celebrated differently across the Indian cultural sphere.

Symbolising the spiritual victory of light over darkness, and good over evil, it’s widely associated with the Goddess Lakshmi and Lord Ganesha, both signifying welfare and prosperity, and it coincides with the post-monsoon harvest bringing abundant crops.

Hindus also celebrate the day Mother Goddess Durga destroyed demon Mahisha and the return of deities Rama and Sita to Ayodhya after their 14-year exile. The lights of Diwali represent those lit by the community to guide the deities home.

Sikhs celebrate the foundation of the Golden Temple at Amritsar and the release from prison of the sixth guru Hargobind Singh in 1619, while Jains celebrate the moment Lord Mahavira reached a state of Moksha or nirvana.

The five-day festival, also known as Deepawali, began on 4 November this year; the dates change each year in line with Hindu and lunar calendars, but always fall between October and November on the 15th day of the Hindu month of Kartik.

On day one, Dhanteras, houses are cleaned, and gold is often bought for good luck. On day two, Choti Diwali, homes are decorated with coloured sand arranged in ‘rangoli’ patterns on the floor and rows (avali) of clay lamps (deepa), which give the festival its name. Day three, Diwali, heralds the new moon, Amavasy, and is the peak of the celebration when families gather to share prayers and feasts. On day four, Padwa, the first day of the new year, Indian families open their doors to friends and neighbours, sharing their heritage and receiving gifts, before the festival concludes on day five, Bhai Duj, when brothers visit sisters for the final feast.

“Tonight we have more than 10 nationalities in our house celebrating Diwali,” said one Dubai resident Aditi Wuenschr, who invited neighbours to join the party, “and not just the religious part of it; just to come together for some laughs, the lights, good food and making memories.”

Celebrations also spilled out into the streets this year. After a subdued Diwali subject to pandemic restrictions in 2020, the pent-up desire to mark the event was high.

Considered an auspicious time of year, it was certainly profitable for Dubai’s booked-out Indian restaurants, and the city’s gold retailers. Buying gold during Diwali is a tradition, and according to the World Gold Council, in Q3 2021, demand for gold rebounded 33 per cent year-on-year making Diwali very lucky indeed for those in the trade.

What does tolerance mean to the residents of Dubai?