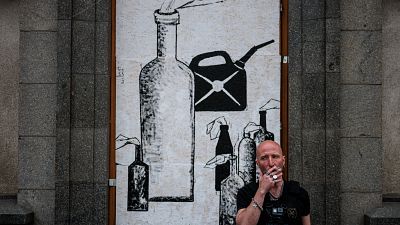 Amid the destruction in the streets of Kharkiv, one artist is determined to fill the walls devastated by war with his art   -   Copyright  Dimitar Dilkoff/AFP
By AFP  •  Updated: 19/05/2022

Wearing a black bulletproof vest bearing the insignia of the Ukrainian military, street artist Hamlet Zinkovsky has been painting the war-torn streets of Kharkiv - the 35-year-old's hometown.

Recognised internationally for his black and white artwork, which is exhibited across the world, Hamlet has put aside his globe-trotting success and is now using his talent to support the Ukrainian war effort.

"If I move, I can have my career somewhere abroad. But it will only be comfort. In Ukraine, I have the feeling that I'm building the country. The city is my gallery," he said.

According to Hamlet, the commander of a local military battalion ordered him to enliven the streets of Kharkiv with his art.

"I was invited to a battalion ... My commander gave me an order: paint!" he explained.

Hamlet signs each of his street artworks with "Hamlet 22, Hartiya Battalion".

Inspiring the nation through art

Hamlet has been painting his artwork on wooden planks that cover windows and exteriors of damaged buildings in Kharkiv.

He hopes his works will one day be given to a future war museum or sold to raise money for Ukraine's war effort against Russia.

The artist believes his street art can help lift public morale and inspire the Ukrainian people to "fight and defend" their country.

"I see people smiling and happy because they see [me painting] a destroyed building which they loved, he explained.