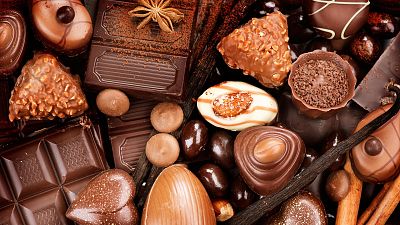 Yes, the ice caps are melting. Yes, Europe is at war again.

But for just today, let’s celebrate the simple stuff. Chocolate.

Whether you like it as a dark and bitter bite or a creamy milky drink, chocolate has fans all over the world.

Today’s global treat was first created from the cacao bean in the earliest days of the Mesoamerican civilisation.

The native site of the cacao tree, one of the first examples of chocolate use is by the pre-Olmec people who fermented the beans and drank them as long ago as 1750 BC.

Since then, it’s become one of the most popular flavours in the world. Today, the industry is worth nearly $50 billion, worldwide.

In 2009, a team of researchers at the University of Warwick kitted out a Formula 3 racing car to run on chocolate.

The fuel used by the car is made from a combination of waste chocolate and vegetable oil.

That wasn't all, the team also made the bodywork of the car out of potatoes and made a steering wheel derived from carrots.

The car was perfectly up to speed with the strict regulations of the Formula 3 sport, meaning the car could easily reach speeds of 125 mph around corners.

Forget what you've been told, chocolate is, in fact, good for your teeth. Well, not all chocolate exactly.

Some studies have shown that cocoa is better at fighting tooth decay than fluoride, the toothpaste ingredient.

The reason is that plain dark chocolate is a good source of polyphenols, which can limit oral bacteria. These neutral chemicals can also stop you from having bad breath and stop bacteria from turning sugar into acids, which damages teeth.

However even dark chocolate contains sugar, which comes with its own set of health risks, so consume in moderation.

No, we're not talking about those little bags of foil-covered chocolate coins that appear during the holiday season.  It seems the ancient Mayan civilisation actually used chocolate as money.

The archaeologist Joanne Baron found evidence that as early as the 7th century CE, the Mayan people were using chocolate for payment.

Before then, much of the civilisation would have been run on one-off barters but Baron posits the Mayans started using chocolate as a widely accepted form of payment.

In a pyramid mural from Guatemala, a woman offers a bowl of steaming hot chocolate in exchange for dough.

To make you smarter

Research has shown that people who eat chocolate at least once a week score higher across brain skill areas including numbering, abstract thinking and visuospatial and working memory.

The theory is that the flavonoids in chocolate act as a vasodilator which improves our blood flow. The benefit of that is improving your circulation, which in term helps your brain work at max power.

So this one won’t be as useful as the brain-training or fuel-replacing uses of chocolate but it’s still good to know you can fake a death scene with the help of some cocoa.

For the black and white classic, Psycho, Alfred Hitchcock apparently used chocolate syrup as it had the right consistency for blood.

It was also used in iconic 60s horror film Night of the Living Dead and Scorsese's boxing film Raging Bull.