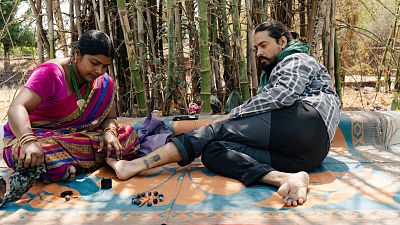 Design and pattern have always intrigued Amit Ajrel since childhood. Initially, he was interested in drawing and painting. Whilst exploring his artistic skills, his interest organically evolved into tattooing. Amit learnt about the Indian tribal tradition of tattooing, known as Godna.

While researching the ancient practice, Amit came across the Baiga Tribe, an aboriginal ethnic group in central India. With little information available, Amit travelled from his home in Delhi to a small rural village in Chhattisgarh state to meet with the Baiga tribe women that continue to practice the art of Godna.

"I got to know that this is one of the oldest parts of Indian culture. This culture depicts the history of India," Amit told Scenes. "Most of the time, the information available is scarce, but here we have people who can explain the entire process to you."

Godna is a century-old practice passed down from generations and performed by tribal groups across northern and central India. The artist uses a hand poke technique for tattooing elaborate patterns across the body.

Traditionally in the Baiga tribe, Godna is practised mainly by women, and the marks represent the different stages of a woman's life. Tattoos are an integral part of their identity, giving them a sense of pride and belonging to their tribe. A girl child born in a Baiga tribe receives her first tattoo on the forehead around the age of nine.

When a girl goes through puberty, marriage, and childbirth, she gets more tattoos on her body. Each symbol holds a different significance. Different patterns act as identification marks that distinguish one ethnic group and cultural area from another.

"A forehead Godna is a sign of our tribe's traditions. Without a Godna, they aren't considered a part of the tribe," says Mangla Bai, a Baiga tribal artist. "There is makeup and accessories, but after death, one takes nothing, but only Godna on one's body."

Mangla Bai fears Godna will soon be forgotten despite its age-old practice. The ancient custom has been heavily influenced by modernisation. "These days, I am telling everyone: 'This art is getting lost and should not be stopped. At least a forehead Godna is essential so that a symbol of your tribe is maintained'," explains Mangla Bai.

Amit hopes to raise awareness about the tribes and culture of Godna through his tattoos, paintings, and exhibitions. "I focus on keeping Baiga as Baiga as it has always been. I focus on using the exact same patterns that generations have used within the community for centuries." Amit explains. "If I learn, I can pass this knowledge on to people. This is how our dying art, like this tribal art on the verge of extinction, will be revived again."

Meet the inventor saving the lives of pregnant women across Uganda