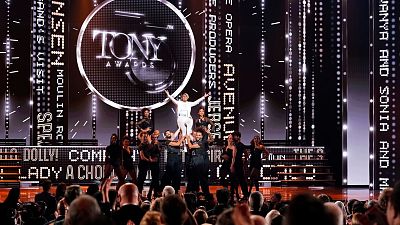 The evening was hosted by West Side Story Oscar-winner Ariana DeBose, who admitted pride that 'the theatre is becoming more reflective of the community who adores it'.

DeBose performed an unforgettable musical number interacting with several members of the crowd - at one point she even sat on Andrew Garfield's lap as he wrapped his arms around her while she sang.

It was a special night for British theatre - Company (originated in the West End) and The Lehman Trilogy dominated the award wins.

Elliott's win made Tony history by making her the only woman to have won three Tonys for directing.

In her acceptance speech she thanked Sondheim for letting her put a woman "front and centre.'

A night of diversity and inclusivity

The Lehman Trilogy, which follows the fortunes of a single family into the financial crash of 2008, was crowned Best New Play and Sam Mendes won for Best Direction of a Play.

One of its three stars, Simon Russell Beale, won for Best Actor in a Play and thanked the audience for coming to see a trio of British actors tell a New York story.

The musical, which also won the 2020 Pulitzer Prize drama award, was written by Michael R. Jackson.

A Strange Loop's win also secured Jennifer Hudson with official EGOT status. It was the final trophy she needed to complete the quartet of having won an Emmy, Grammy, Oscar and Tony. (Hudson serves as a producer of the show.)

Myles Frost moonwalked away with the award for Best Lead Actor in a Musical for playing Michael Jackson in MJ.

Deirdre O'Connell won for Best Actress in a Play for her work in Dana H., which tells the story of a real woman kidnapped by a former convict and white supremacist. O'Connell never speaks in the play, instead she lip-syncs to an edited recording of the survivor.