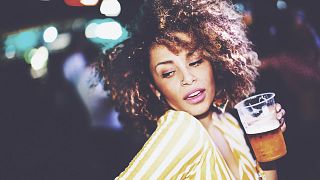 Fear of needle-spiking is growing among clubbers in France, a few months after a wave of similar anxiety swept the UK.

There have been more than 100 reports of needle-spiking in French clubs and bars since summer 2021.

Needle-spiking involves the victim being injected against their will. Much like drink spiking, there have been reports of people being injected with Rohypnol or Gamma Hydroxybutyrate (GHB) – both known to be used as date-rape drugs.

In the majority of the reported cases in France, no drug was identified. However, this could be due to late blood sampling, after any drug has already left the bloodstream.

When the rate of needle-spiking became national news in the UK last winter, there were reports of incidents from across the country and multiple arrests.

In January, the UK National Police Chiefs Council confirmed that police had received more than 1,300 reports of needle-spiking in the previous six months. Police were also aware of 14 secondary offences after the spiking, such as sexual assault or theft.

In recent months, the phenomenon has hit French nightlife, with people saying they suffered from dizziness and nausea after being pricked on French dancefloors. The French Ministry of the Interior confirmed to Euronews that 80 per cent of the targets have been young women.

“To date, nearly 130 investigations have been opened by the French National Police. The first facts were recorded from summer 2021. However, the phenomenon gained momentum in spring 2022,” explained a spokesperson for the Ministry.

In both the UK and France, the anxiety over needle-spiking has been followed by a wave of scepticism over how prevalent it is in reality.

There are risks that reports of spikings could lead to a “social panic,” according to Robert Bartholomew, a medical sociologist at the University of Auckland, in a report in Psychology Today.

“After two years of pandemic restrictions, British nightclubs had only just returned to normal in the summer of 2021. Young people had endured isolation, disruption to their education, friendships, and love lives,” he said.

“They had been bombarded with frightening news reports about Covid, and as clubs reopened, there was still a fear of the virus and guilt associated with the possibility that they may catch it and pass it on to a vulnerable loved one. The needle, an object of fear for many people, may represent anxiety about vaccinations and fear of contamination.”

French newspaper Sud Ouest reported there had been a “psychosis” among clubbers in Dordogne after two men and a woman told police they had been pricked at a club. Additionally, 50 people ran from a club and two women fainted after a man shouted “I’ve been pricked” in a club in Montauban.

There is concern within the nightlife industry about the impact a mass panic over needle-spiking could have on French clubs.

Patrick Malvaës, president of the National Syndicate of Discotheques & Leisure Places, said: "For us, before [a needle-spiking incident] is even a reality, it’s... an example of the damage a rumour can do, as words travel fast."

Malvaës is concerned that there has been too much focus on unproven needle spiking events. “It could be needles, but it could also be.... tooth picks, scissors, nails, or pointed or sharp objects,” he says.

He also believes that in many cases there have been no drugs involved: "There’s no proof of a shot of something like drugs. No heavy consequences. No proof of GHB or other drugs."

However, the Ministry of the Interior, while acknowledging that it’s possible someone who suspects they have been needle-spiked may be mistaken, says it has found the majority of those who reported incidents had been injected with something.

The Ministry recommends reporting suspected needle-spiking as soon as possible in order for such proof to be established. It says it is prioritising filing these complaints to allow medical services to effectively trace the presence of materials which can disappear from the bloodstream quickly.

"Victims should not hesitate to report the incident to the police and file a complaint in order to obtain the blood sample needed to characterise the incident, identify the substance and help identify the perpetrator."