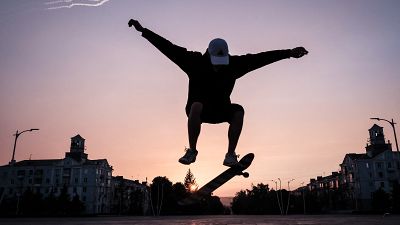 In Kramatorsk, the heart of Ukraine's administrative centre for the eastern war zone, one teenager skates through its empty streets surrounded by destroyed buildings and the sound of air raid sirens.

Roman Kovalenko remains determined to keep up his hobby of skateboarding, despite the threat of Russian attacks.

Kramatorsk, if seized, would prove hugely significant for the Russians in the third month of the war.

But even under the circumstances, Roman embraces the time with his skateboard under his sneakers.

"On the one hand it's sad, but on the other, it's a special atmosphere," the 18-year-old said of his time skating through the abandoned streets of Kramatorsk.

Kramatorsk has been bombarded with powerful long-range missiles, destroying much of the city's buildings and infrastructure.

The population of the industrial city of Kramatorsk had already dwindled since the 2014 conflict in eastern Ukrainian started. That number has plummeted further since the Russian invasion that began the gravest European conflict since World War II.

The rebels' capture of the Donbas region's capital, Donetsk, in 2014 forced the pro-Western leaders in Kyiv to move their administrative centre about 80 kilometres (50 miles) to the north in Kramatorsk.

The Soviet-era city is dominated by a row of factories running along a railway line in a riverside valley - which make perfect targets for the Russian forces slowly advancing across the hills north of Kramatorsk.

Weeks of trench warfare have enabled the Russians to encroach within striking distance.

As Kovalenko rolls through the streets alone on his skateboard, he represents a haunting image of an ordinary child dropped into the middle of a harsh war.

"I feel a sort of melancholy because there is no one around," he said.

"But walking alone before military curfew, I feel like the king of the streets."

Kovalenko has witnessed the destruction the war has brought on his city.

"I have nothing else to do," he shrugged. "All my friends have moved out to different parts of Ukraine. And I'm bored."

Peace Square in the city, once a popular evening hotspot for fellow skateboarders and teens, now stands eerily empty.

Kovalenko has trouble explaining why he remains in Kramatorsk and hasn't headed west, like his friends.

"Of course I would like to meet up with my friends and go out, but that's not really possible now," he said.

Family turmoil has left him living alone with his mother. He hints at financial problems but quickly adds that other people have much bigger problems.

For now, he uses his hobby of skateboarding as a distraction from the horror unfolding around him.