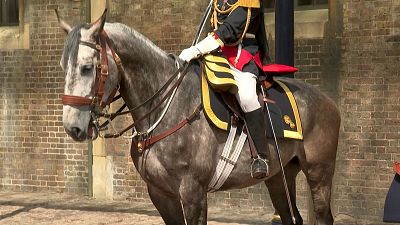 What do you give a monarch on her platinum jubilee? A horse fit for a queen, bien sûr.

France has gifted Britain’s Queen Elizabeth II a horse as part of a series of gestures to mark the occasion of her 70 years on the throne.

The horse, full name Fabuleu de Maucour, was accepted on behalf of the Queen by Lord Rupert de Mauley, the Master of the Horse, inside Windsor Castle on Wednesday, AFP reported.

Fabuleu, a grey gelding, comes with a ceremonial saddle and a cavalry sabre.

“The shapeliness and elegance of the horse, a 7-year-old standard-bearer for the Garde Républicaine, epitomises French horse-breeding,” the French embassy said in a statement.

The horse was part of French President Emmanuel Macron’s escort on the Champs-Elysées during the Victory in Europe Day commemorations this year, it added.

The gift is one in a series of gestures by France to pay homage to the Queen, a keen horse rider.

In a video message on Thursday June 2, the French president paid tribute to the monarch and her “devotion” to the relationship between the two countries.

“During the past 70 years, the president of the French Republic has relied on very few constants at the international level,” Macron said, addressing the Queen. “Times have changed. Europe has evolved. Our continent is again experiencing war.”

“Throughout these transformations, your devotion to our alliance and to our friendship has remained, and has helped build the trust that brought freedom and prosperity to our continent.”

“You are the golden thread that binds our two countries, the proof of the unwavering friendship between our nations,” Macron added.

The French president will preside over a flame rekindling ceremony at the Arc de Triomphe monument on Thursday. He will lay a wreath at the Tomb of the Unknown Soldier, in the presence of British Ambassador to France Menna Rawlings. Both the British and the French national anthems will be played, the Elysee said.

Ahead of the official celebrations, a Malus “Royal Beauty” apple tree from Normandy was planted in the garden of the French embassy in London.

The planting highlights "the UK’s historic ties with Normandy, of which apples are a speciality," the embassy said. In the same spirit, a French oak tree will be planted this autumn in Kensington Gardens, it added.

From Thursday to Sunday, the United Kingdom and Commonwealth nations are celebrating the Queen’s platinum jubilee, which marks her 70 years on the throne.

At 96 years old, Queen Elizabeth II is Britain’s longest-reigning monarch and the first to reach seven decades on the throne.