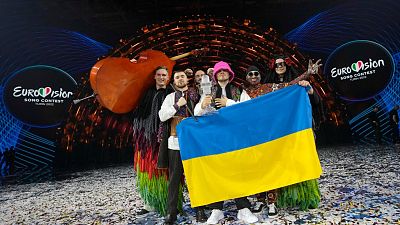 Ukraine have emerged as victors in this year's Eurovision Song Contest held at the PalaOlimpic on Turin, but what have we learned from the Grand Final? Here's five key takeaways:

Public voting can change everything

Ukraine's Kalush Orchestra went into Saturday night's Grand Final as the clear favourites to win. But they were propelled over the line by a massive public vote. The jury votes, which make up 50% of the points total, put Ukraine in 4th place, almost 100 points adrift of leaders UK.

So was this a 'political' vote from the public because of the war? Well, not so much political -- compassionate and supportive might be better adjectives. Remember: the song was good in its own right, a catchy and poignant rap-ode to the lead singer's mother Stefania; Ukraine has never before failed to qualify from the semi finals to the final; and they have a strong recent track record at Eurovision, with two wins (Ruslana in 2004, and Jamala in 2016) and eight more top 10 finishes in the last couple of decades.

The Eurovision Song Contest has produced some memorable interval acts, just think of the global phenomenon Riverdance, which was first performed at the 1994 contest in Ireland. The trick is to showcase something that's fun and engaging for the audience, but which doesn't overshadow the main event.

In Turin the highlight of this year's interval festivities -- which take place while the public are voting -- was a medley of hits from singer-songwriter Mika, who was also one of the Grand Final hosts.

Mika artfully demonstrated what an exceptional showman he is, performing with swagger and style as he gyrated on top of a piano, rising high above his dancers, and taking us on a musical romp through his biggest international hits.

Unfortunately this part of the contest was so much better than quite a few of the actual contestants that it made us forget about them completely!

Placement within the show really matters

Although artists draw lots to see whether they'll perform in the first or second half of the Grand Final, it is ultimately up to the producers to put together the show they think will engage the most viewers on television sets around the world.

This year's show started with a bang, with Czech Republic performing one of the strongest dance tracks in the competition -- the kind of song you'll hear on the radio or in a club across Europe this summer. While it was undoubtedly an exciting way to start the contest, would the song have done better with the public if it had been placed later in the show? Almost certainly.

There was a problem with pacing too: the producers decided to lump a lot of the slower tracks together, with  Germany, Azerbaijan, Lithuania, Belgium, Greece and Iceland all performing in a block together. The juries noticed Greece, one of the pre-contest favourites, but the public forgot about Amanda Tenfjord, lost in the running order, and she did poorly with the public as a result.

The United Kingdom and Spain were undoubtedly this year's comeback kings and queens.

This year both Spain and the UK switched up their selection processes, going about things in a new way, and it seems to have worked with Chanel and Sam Ryder scoring their nations' highest Eurovision placings for years (and years and years!)

The UK won the jury vote, and Spain received multiple 12 points from national juries as well. It shows that with credible songs, talented artists, engaging stage performances, and a positive attitude towards the Eurovision,  countries can turn around their fortunes.

Countries with lessons to learn

As Eurovision winners ABBA once sang, the winner takes it all, the loser has to fall.

Germany has performed at more Eurovision Song Contests than any other country, appearing every year except 1996. But once again this year German scored very poorly with both the juries and the public.

In fact they've come last or second last in six out of the past seven contests.

So what can Germany do to change? They could do something similar to Spain which is using a music festival to find an act - a format that's also successful for Italy. Or they could work with a record label to identify an emerging artist the way the UK has done. Or they could take a leaf from countries like Israel and Malta which use a TV talent show to select their act (although maybe that's not the best example in 2022 since neither country qualified for the final -- but in previous years it's worked well!)

With a shakeup, Germany could get back to winning again, as they did with Lena in 2010 and Nicole in 1982.