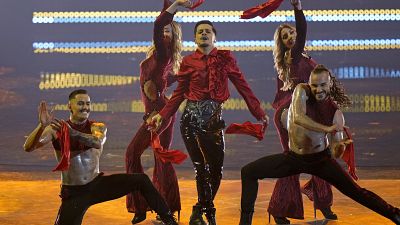 WRS from Romania singing Llamane performs during the Grand Final of the Eurovision Song Contest at Palaolimpico arena, in Turin, Italy, Saturday, May 14, 2022.   -   Copyright  Luca Bruno/Copyright 2022 The Associated Press. All rights reserved
By Euronews  •  Updated: 16/05/2022

Voting irregularities were identified in six countries taking part in Eurovision 2022, according to the European Broadcasting Union (EBU).

In a short statement, EBU said that certain "irregular voting patterns" were spotted following the second dress rehearsal and second semi-final of the competition.

The irregularities were related to national jury votes, not the public votes.

"In order to comply with the Contest’s Voting Instructions, the EBU worked with its voting partner to calculate a substitute aggregated result for each country concerned for both the Second-Semi Final and the Grand Final (calculated based on the results of other countries with similar voting records)," said the statement.

While it did not name the countries in its statement, the teams which saw their jury votes removed were: Azerbaijan, Georgia, Montenegro, Poland, Romania and San Marino.

In reply to the announcement, Romanian broadcaster TVR1 said it was "surprised" by the change to its jury results.

"The organisers awarded a different set of scores to the finalists on behalf of our country's jury," it said. "We would like to point out that the Romanian jury decided to give maximum points to the representatives of Moldova ...  We reiterate that neither the jury nor the TVR representatives were informed after the second semi-final of the existence of any suspicions regarding the Romanian vote."

TVR1 also called the way in which the new results were calculated "non-transparent", saying it had asked the contest's organisers to provide an official reason for replacing the jury's score.

Euronews has contacted EBU for more information about the nature of the irregularities but had not received a response at the time of writing.

"The EBU takes any suspected attempts to manipulate the voting at the Eurovision Song Contest extremely seriously," the statement added "and has the right to remove such votes in accordance with the Official Voting Instructions, irrespective of whether or not such votes are likely to influence the results and/or outcome of the voting.