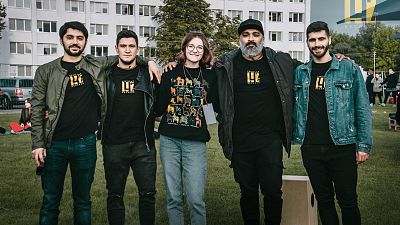 They might not have made it to Eurovision 2022—or even gotten close for that matter—but Up Hill 7 has a bigger point to prove.

Based in the tiny Lithuanian village of Pabradė, home to just 6,000 people, the six-person pop band is formed of individuals from Afghanistan, Lithuania, Belarus and Sri Lanka.

This year Up Hill 7 wanted to join the likes of ABBA and Celine Dion, and attend Europe’s international songwriting competition Eurovision.

In what the band hoped was a musical first, their proposed Eurovision 2022 entry was sung in English, Dari and Lithuanian, although lead singer Abdullah Qiam admits he can't yet speak the Baltic language.

“It is important to show diversity in our song,” Abdullah told Euronews. “That you can mash up western and eastern languages, eastern styles and western music, all of it together and create something unique. I mean, are there any other musicians like this?

“Well, at least, I hope not anyway,” he added with a smile.

Their song, which did not make it through to the second round to represent Lithuania in Eurovision 2022, is about freedom.

Abdullah, who came to Lithuania from Afghanistan as a refugee, explained the song was influenced by his personal experiences and the stories of other people he’d heard on the way to Europe.

Still, Abdullah did not want to dwell on aspects of his personal life.

“I want to be treated like everyone else,” he said.

More important for the band was that the song had universal appeal. “We tried to write it in a way that anyone, anyhow could relate to it,” said Abdullah. “Everyone in their life has been through something where their freedom is taken away.”

'It's interesting for the people of Europe to see something different'

Watched by more than 180 million people in 36 different countries, Up Hill 7 thought that Eurovision 2022 would be a great platform to spread a positive message, as well as publicise their band.

“What we want to show is that people from different backgrounds can come together, cooperate, live well and create something beautiful,” said Abdullah. “This is important because we live in the 21st century.”

“The world is becoming more diverse. Discrimination and hatred should not exist,” he continued.

But the band had other objectives too. “Some money and fame would be nice too,” laughed drummer Navadharshan Navaratnam. “Everything is important to us,” he said, “both the message and our success.”

Originally from Sri Lanka, Navadharshan has called Lithuania home for the past four years, after fleeing an unsafe situation in his home country.

“I never planned a destination when I left,” he said. “But this is where I have ended up.”

'Locally we have so much support'

United by a love of music, Up Hill 7 was formed only one year ago through a series of chance encounters.

After spontaneously jamming together at a bar, the band began playing small shows in local venues, picking up members along the way, eventually progressing onto bigger stages.

“And we rocked it,” said Abdullah.

Several members of the band, especially those from abroad, said these gigs have helped them integrate into the community of Pabradė.

An organisation that has worked closely with Up Hill 7 is Artscape, an NGO aiming to promote public tolerance of third-country nationals through innovative art projects.

“Even in these difficult times, the band is perceived very well in the area,” said Artscape coordinator Aušra Raulušonytė. “No celebration is imagined without them.”

Alongside its musical exploits, Up Hill 7 works with migrant communities in Lithuania, hosting music workshops and playing at fundraising events.

“I would describe their music as glocal, as a combination of global and local,” added Aušra. “They are firmly rooted in this small town, yet at the same time trying to bring different cultures together.”

An alternative perspective on migration

While the band stressed they did not want to be politicised in any way, others who knew them said their existence was hugely important, especially in a society where migration was not that common in the past.

“There is so much cool stuff there,” said Luke Milker, who helped Up Hill 7 produce their Eurovision track pro bono. “We wanted to create some positive outlook on migration, everything in the news is so negative about refugees in Lithuania.

“It is important to offer an alternate perspective,” he added.