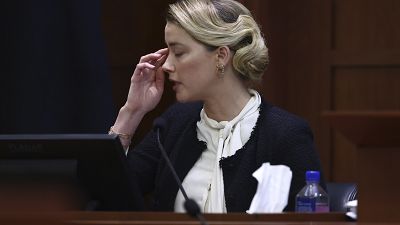 Amber Heard finally took to the stand to give her testimony against ex-husband Johnny Depp on 4 May.

The defamation suit has become one of the most publicly followed trials in recent history, with fans of each actor turning in daily to watch proceedings.

The case was brought by Depp against Heard over an article she wrote for the Washington Post in 2018 in which Heard referred to herself as a “public figure representing domestic abuse.”

As it is a defamation case, the ultimate decision will largely rest on whether it can be proven that Depp abused Heard over the course of their relationship.

A pivotal incident in the case is the allegation that Depp sexually assaulted Heard with a liquor bottle.

Depp began a four-day testimony to the jury on 19 April. During his time at the stand, Depp claimed that allegations made by Heard and her team of his substance abuse were embellished. Although he admits to drug and alcohol use, he claims it has been in response to trauma instead of for partying.

Depp has also testified at length about his difficult childhood and abusive relationship with his mother. He has likened his relationship with Heard to his own mother, claiming it also consisted of an “endless barrage of insults.”

During his testimony, Depp described an incident where Heard injured his finger after he claims she threw a vodka bottle at him.

On his final day of testimony, Depp also denied accusations that he extinguished cigarettes on Heard.

Outside of Depp’s testimony, there has also been a slew of video and audio evidence presented to the court, as well as other witness and expert testimonies.

For those unfamiliar with court proceedings, it may seem odd that it is only now that Amber Heard is able to give the jury her own take on theaccusations. The suit, which began on 11 April was brought by Depp, putting him in the position of prosecution.

This means that for the first half of the trial, it is up to Depp’s team to make their case. Although Heard’s team can cross-examine the prosecution, for the past few weeks it has still been Depp’s narrative leading the case.

But now the prosecution has made its case, it’s Heard’s turn, as the defence, to rebuke Depp’s allegations and make her own if she wishes.

Heard took to the stand for the first time on 4 May, over three weeks after Depp began his testimony.

In the past two days, Heard has made multiple accusations.

She began by describing an incident where she claims Depp threw a glass at her. She alleges this then escalated to regular use of demeaning language against her and Depp throwing more items at or near her.

When asked about the first time Depp was allegedly violent toward her, Heard told of her sitting with him on the couch when she asked about a tattoo of his. She claims he told her it said “wino” and that she laughed, not realising he was being serious. Then, Heard claims Depp slapped her.

Heard claims Depp once sexually assaulted her in a panicked state looking for drugs. He allegedly frisked her and ripped her dress and insisted on conducting “a cavity search.”

During the second day of her explosive testimony, Heard described an allegation of Depp sexually assaulting her with a liquor bottle during an alcohol-fulled fight.

The alleged assault took place the same night that Depp described severing his finger on a smashed vodka bottle. Heard claims while she did smash a bottle, she was not aware of Depp’s injury until hours later.

Heard has also described an incident where she says Depp kicked her repeatedly and also alleges Depp had thrown more bottles at her.

During her counter-argument Heard also claimed Depp was controlling about the acting parts she’d take and whether they would have sexually provocative elements.

Her testimony also went into detail on allegations of Depp’s behaviour on drugs and alcohol and the way his security team enabled him.

In a week’s time, Depp’s team will cross-examine Heard’s testimony before both sides make their closing statements to the jury.