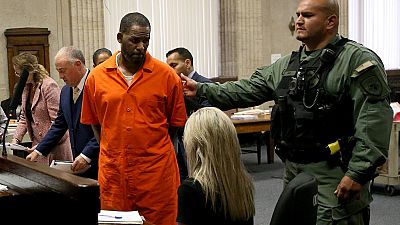 In this file photo taken on September 17, 2019 Singer R. Kelly turns to leave after appearing at a hearing at the Leighton Criminal Courthouse in Chicago, Illinois.   -   Copyright  ANTONIO PEREZ
By Josephine Joly  & AP  •  Updated: 28/09/2021

R&B superstar R. Kelly has been convicted on all counts on Monday after a jury found him guilty of being the ringleader of a decades-long racketeering and sex trafficking scheme preying on underage girls, young men, and women.

The disgraced singer, who exploited his superstar status to sexually abuse black women, men, and children, is said to face the rest of his life in jail for crimes including violating the Mann Act, an anti-sex trafficking law that prohibits taking anyone across state lines "for any immoral purpose".

After two days of deliberation, the federal court in New York City found Kelly guilty on all nine counts, after decades of avoiding criminal responsibility for numerous allegations of misconduct.

Acting US attorney Jacquelyn Kasulis announced the verdict on September 27, saying that "justice was finally served."

"Today's guilty verdict forever brands R. Kelly as a predator who used his fame and fortune to prey on the young, the vulnerable, and the voiceless for his own sexual gratification. A predator who used his inner circle to ensnare underage girls, young men, and women for decades in a sordid web of sex abuse, exploitation, and humiliation," Kasulis added.

Prosecutors alleged that the entourage of the 54-year-old singer, born Robert Sylvester Kelly, who helped him meet girls – and keep them obedient and quiet – amounted to a criminal enterprise.

Two people have been charged with Kelly in a separate federal case pending in Chicago.

A decades-long battle for justice

Other testimonies focused on Kelly's relationship with 15-year-old singer Aaliyah, with whom the R&B singer had illegally obtained paperwork to marry the young girl in 1994 after he feared he had impregnated her. Kelly was 27 at the time.

One of the final witnesses described seeing him sexually abusing Aaliyah around 1993 when she was only 13 or 14.

Aaliyah, whose full name was Aaliyah Dana Haughton, worked with Kelly, who wrote and produced her 1994 debut album, "Age Ain't Nothing But A Number." The young phenom died in a plane accident in 2001 at age 22.

Several other accusers testified in lurid detail during the trial, alleging that Kelly forced them to obey perverse and brutal whims when they were underage. Jurors were shown homemade videos of Kelly engaging in sex acts that prosecutors said were not consensual.

One of Kelly's accusers' lawyers, Gloria Allred, said outside the courthouse that "of all the predators she has gone after", a list including Harvey Weinstein and Jeffrey Epstein, "``Mr. Kelly is the worst".

For years, the public and news media seemed to be more amused than horrified by the allegations of his inappropriate relationships with minors, and his records and concert tickets kept selling, even after he was arrested in 2002 and accused of making a recording of himself sexually abusing and urinating on a 14-year-old girl.

Kelly had also been tried once before, in Chicago in a child pornography case, but was acquitted in 2008.

The US singer's lawyer, Deveraux Cannick, labelled the accusers "groupies" and "stalkers". He questioned why women stayed in relationships with Kelly if they thought they were being exploited, adding that "they participated of their own will".

The accusers said they were ordered to sign nondisclosure forms and were subjected to threats, blackmail, and punishments if they broke "the rules".

#MeToo era catching up with the R&B "predator"

Widespread condemnation didn't come until the release of "Surviving R. Kelly," a documentary series on young women emerging from the shadows and uniting their voices against singer R. Kelly, after the accusers wondered if their stories had been previously ignored because they were Black.

One of the producers of the show, Tamra Simmons, said she felt "a ball of emotions" come over her upon hearing the verdict.

"These women survivors, they came forward in the documentary, they actually have become family to me," she explained.

"I'm just so happy to see them receive the justice that they have been seeking for all these years."

Herself and fellow producer Jesse Daniels have been vocally against the "seperating the art from the artist" argument used by the singer's fans to defend him. This recently reemerged in the wake of Drake giving the singer a credit on TSU, a song from his latest album "Certified Lover Boy".

"I honestly feel like, you know, you can, you can't separate him from his music and the fact that he's the King and of R&B and everything like that, like that doesn't matter when it comes to Black women and Black men being violated.

"It doesn't matter to me. You're not, you were never a King. We gave you that title and we're taking it back," said Simmons.

R. Kelly has been jailed without bail since 2019. The New York case is only part of the legal peril facing the singer.

He also has pleaded not guilty to sex-related charges in Illinois and Minnesota. Trial dates in those cases have yet to be set.

His sentencing is scheduled for May 4.