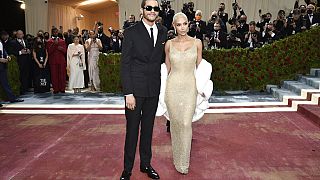 Even by the standards of the Met Gala, Kim Kardashian’s choice of red-carpet attire this week – one of Marilyn Monroe’s most iconic dresses, last worn in 1962 – was a shock. Away from the heady glamour and reverence of the event itself, though, some onlookers are less than happy.

The Jean Louis gown that Kim wore, made of nude souffle gauze and covered in 2,500 hand-stitched Swarovski crystals, was custom-made for Monroe. It last appeared in public when she sultrily sang Happy Birthday to President John F. Kennedy at his party in Madison Square.

The star died two and a half months later. The dress was last bought for $4.8m in 2016 by global museum chain Ripley’s Believe It or Not! and has been housed in Florida since then.

Until Monday night, that is. In reality, Kim only wore the dress for a few minutes to pose for the cameras before changing into a custom-made replica. But the fact that it was worn at all has drawn the ire of historians and Monroe experts.

Justine De Young, associate professor of fashion history at the Fashion Institute of Technology in New York, told People magazine the stunt was “irresponsible and unnecessary… An iconic piece of American history should not be put at risk of damage for an ego boost and photo op.”

In order to fit into the dress, Kardashian said she had lost 16lbs in three weeks by cutting out sugar and carbs. “Crash-dieting to fit into the original dress,” De Young said, “is also an unfortunate message to be sending: one more in keeping with ideals of the 1960s than today."

Monroe biographers including the author Michelle Morgan weighed in with concerns that sweat, perfume and make-up could have damaged the garment.

“The gown is extremely fragile and has been previously kept in temperature-controlled conditions,” Morgan said. “But now here it is, not only being worn, but also in a red carpet environment, where anything could have happened to it.”

Ahead of the fashion event in New York, Kardashian also told reporters the dress was “transported by guards” to her home and she wore gloves when she first tried it on.

An official from Ripley’s also presented her with a lasting memento: a lock of Marilyn Monroe’s hair in a jar, which she said would be “sleeping with me every night”.

Scott Fortner, the owner of one of the world's largest private collections of Monroe's personal property, said there could also be cause for concern as the dress was made exclusively for Marilyn: “She asked that it be a dress that 'only Marilyn Monroe could wear'.”

But he added: “While I wouldn't have approved anyone wearing Marilyn's gown were it part of my collection, due to its value and overall significance, at least now we have seen what it looked like 'in motion' when worn by Marilyn."

Kardashians listen as prospective jurors criticise them ahead of trial

Vogue’s Anna Wintour says clothes should be passed down generations