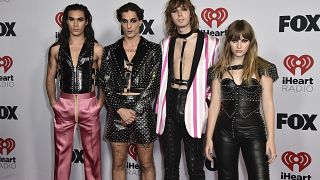 Italian rock band and winners of the Eurovision Song Contest 2021, Måneskin, are about to embark on a global tour.

Their 'Loud Kids Tour' will include 48 gigs in North America and Europe.

However, one city that has been taken off the list is Moscow in response to Russia's invasion of Ukraine.

"Well I think with this situation it's, of course, a very tough situation," said bassist Victoria De Angelis. "So I think it's right to stand up with Ukraine and show respect to that."

The band members on the red carpet ahead of the iHeartRadio Awards in Los Angeles said that they respect their Russian fans but have to take a stand.

Leader singer Damiano David said he wouldn't be comfortable playing in Russia. "With all the due respect to Russian fans, we know that civilians don't want this situation but unfortunately we got to stand for what's right."

How Ukraine's chess community are making moves against Russia