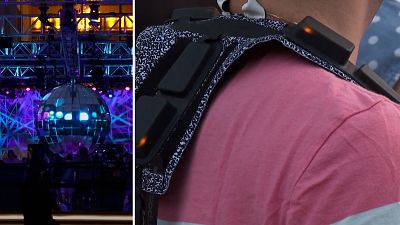 New York City has no shortage of nightlife but for people with disabilities like Sid Marcos, it can be a challenge.

Marcos was one of dozens of people who took part in "An Evening of Access Magic" at Lincoln Center for the Performing Arts in July, which included a silent disco, American Sign Language song-signing and live caption performances.

Throughout Disability Pride Month (July), Lincoln Center aimed to promote the use of tech to make New York's nightlife more accessible to people with disabilities.

At the special event, wearable backpacks, wrist and ankle bracelets were available, allowing deaf and hard of hearing people too feel the vibrations of the music.

The devices, provided by "Music: Not Impossible", can translate music to 24 different points of contact.

The company said people from the deaf and hard of hearing community would typically use a balloon or other object to feel the vibrations but that didn't give the participant the full experience.

"So in essence, what you get is the arrangement of the music in your body, the composition," explained Flavia Naslausky, head of business development and strategy, at Music: Not impossible.

Seth Gore decided to try the backpack at the silent disco, which he said helped him "to feel music through the beats."

"To be able to come here and experience this and have that whole experience is really nice. But many deaf people maybe you know don't have that experience. It's nice to have that here," Gore said through a sign language interpreter.

The Mostly Mozart Festival Orchestra performances, also held in July, were made accessible for the first time through Music: Not Impossible's devices.

The Lincoln Center will hold an ASL production of "Sweeney Todd" on 31st July to wrap up its month-long series of events.

Although, the organisation has said it provides year-round accessible programming to people living with disabilities, and constantly strives to make arts more accessible to the general public.

Istanbul's Basilica Cistern is open to the public once more