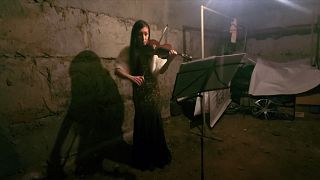 Vera Lytovchenko usually plays for Kharkiv City Opera orchestra but has been sheltering from bombardment since the invasion by Russia   -   Copyright  AP/Vera Lytovchenko
By Tim Gallagher  with AP  •  Updated: 10/03/2022

A musician dubbed the “cellar violinist” has become a social media sensation after playing to comfort fellow Ukrainians in a bomb shelter in the besieged city of Kharkiv.

Images of concert violinist Vera Lytovchenko have inspired an international audience after she began by playing a lullaby for a young boy who was sheltering in the basement of her apartment building.

When heavy Russian bombing of the northeastern city started two weeks ago, Lytovchenko, her professor father and neighbours sought safety in their building's basement.

"Bombs can fall everywhere in our city, so we decided to go down in the cellar," the 39-year-old violinist says.

"We're about 12 people now. We have little boys. We have teenagers. We have old women."

A week into their ordeal, Lytovchenko decided to try to lift the spirits of her cellar mates by holding small concerts.

"All these people are my brothers and sisters now," she said. "I was trying to make them think about something and not about the war for some minutes while I'm playing."

Later she thought to post her recitals which included the calming strains of Vivaldi and even Lytovchenko singing a Russian folk song, on social media. The reaction surprised her as she garnered more than 40,000 views on Facebook and thousands more on YouTube.

"I didn't expect that because I was posting just to reach my friends and relatives,” says Lytovchenko asshe voiced concern for her aunt near Kyiv and other friends around Ukraine.

"Many people text me now saying that my videos give them such support and hope.”

"Someone is alive and someone keeps hope and is optimistic," she said.

Musicians in Ukraine have been helped by fellow players around the world during the last two weeks of invasion.

In one case, Slovenian musicians helped to evacuate members of a Ukrainian youth orchestra. Meanwhile, a different initiative saw violinists from around the world join in a digital performance with Ukrainians to help raise money to aid the country.

Before the war, Lytovchenko played for the Kharkiv City Opera orchestra and taught music lessons.

"It was another life ... a normal life," she said of the time before the war.

Watch: 94 violinists (incl. a sprinkling from the LSO) around the world accompany young violinists, some in basement shelters, in Ukraine. Read the story, donate and download the score to record your own contribution: https://t.co/lJtgkmBAkh#ViolinistsSupportUkraine ?? pic.twitter.com/sga5zXZOgI

"I'm an orchestra player. I am a teacher in college. I have my students, I have friends, I play concerts, I play operas and ballets. I play Italian operas in the theatre."

Describing Ukraine before the war, Lytovchenko said: "We had a cultural life in our country, our cities...but now we can't understand what is happening."

Lytovchenko says she hopes that her posts can help raise funds for Kharkiv's music community.

"I dream about my little financial fund, because I received messages from all over the world, from all countries. They texted me, they want to help," she said.

The violinist wants to help musicians and rebuild Kharkiv, the music college, and music school, as well as help musicians who have lost their homes and been forced to flee the country.

Lytovchenko said as frightening as it is, playing in the cellar to lift the spirits of others has given her new encouragement.

Check out the video above to hear Lytovchenko play