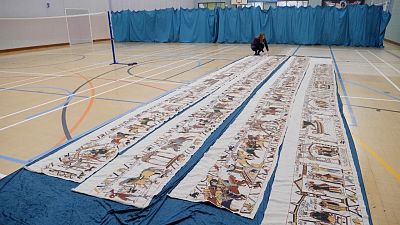 Laid out in all its glory. A stitch-by-stitch recreation of the Bayeux Tapestry.

It is all the work of Mia Hansson, a Swedish woman living in the UK, who has painstakingly stitched half of her replica of the epic 11th Century tapestry.

It's so large that it takes up a badminton court... but it's still only halfway complete.

The final tapestry will stretch across just over 68 metres.

"I was bored," says Hansson. "I was really bored because I used to make Viking reenactment clothing. And six years ago, I didn't have any orders coming in. So I thought, I need a project that I can't finish in a hurry so I don't have to keep making hats and hoods, and glove puppets and finger puppets and stuff. And I thought: You know what? The Bayeux Tapestry! That'll keep me busy for a while."

Busy for a while is no exaggeration because five and a half years later and she's still stitching.

Hansson is the home-carer of her disabled son and this gives her plenty of time to work on the embroidery.

From her home in Wisbech, East Anglia, she says some days she can work on the embroidery for up to ten hours at a time.

But surprisingly Hansson says she has no interest in history.

"No, I really don't like history. I'm really not into history at all. I'm doing this only for the sake of the embroidery," she says.

Few people would have the patience to work on such a lengthy project and one on such a grand scale.

What is the Bayeux Tapestry?

The original tapestry is on permanent display at the Musée de la Tapisserie de Bayeux in Normandy, France.

The work chronicles the events leading up to the Norman Conquest of England, culminating in the Battle of Hastings (1066) where a victorious William the Conqueror seized the crown from the Saxon King Harold.

It is believed to have been commissioned by Bishop Odo - King William's half-brother - in England in the 11th Century.

Its purpose has been disputed by scholars, but many believe it was a work of Norman propaganda to help validate the new King's right to the throne.

Tapestries were commonly found in the castles, churches and cathedrals of Medieval Europe, but the Bayeux Tapestry is unique in its size and scope.

A slow and meticulous process

Hansson isn't content with just making a close approximation of the original, she wants it to be as exact as possible (even when there are stitching mistakes in the original).

She uses various reference guides to ensure her work is faithful.

She needs to make precise measurements and calculate the scale to match precisely.

It's slow and painstaking work and often hindered by her two pet dogs. She works from a reference book.

"This book is like my Bible," she says. "And it's got really big images. So I can see all the stitches in this one. However, I tend to have it on the side of the sofa where I work. And because we've got dogs, they want to get involved, so they want to sleep on the book, preferably on the image I'm looking at."

When will her Tapestry be complete?

She says: "'Well if I've done half in five and a half years I reckon another five and a half so coming in at eleven. My aim was ten but that's just not going to happen."

Her tapestry has reached the point in the tale of Harold being crowned King of England and William preparing an invasion fleet to claim the crown.

Spoiler alert: the tapestry is not going to end well for poor Harold who will shortly be having an arrow stitched in his eye (the truth of which is still debated).

Her unfinished work is going to be shown at St Peter's Church Hall, Wisbech on 12 April.

Here are some of the world's most unusual Valentine's Day traditions