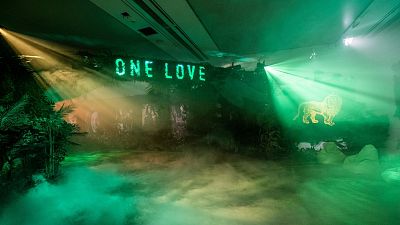 The exhibition takes visitors through a series of themed rooms about Bob Marley's music and legacy   -   Copyright  Saatchi Gallery
By Shannon McDonagh  with AP/Reuters  •  Updated: 04/02/2022

The 'Bob Marley: One Love Experience' showcases artistic and photographic displays of the singer as well as personal items that unveil his relationship with the UK.

Fans will be able to explore rare memorabilia and multi-sensory rooms such as a marijuana-themed forest.

Marley's family members – who had a hand in curating the experience – visited the exhibition on its February 2 opening day.

"He really had a mission to unify people, to speak about injustice and to try and get us to just love one another in spite of our differences," says Cedella Marley, Bob Marley's daughter.

'Every room has something a little different'

Anonymous UK-based street artist duo 'The Postman' – famed for reworking iconic photography – were called upon for much of the exhibition's assembly.

It will stay in London for 10 weeks before heading on a multi-city tour.

Fans can expect memorabilia ranging from the original handwritten lyrics of 'Turn Your Lights Down Low' to shoes Marley wore in the 1970s, along with other rare finds.

The sounds as well as the smells from Jamaica are diffused in the rooms.

"Every room has something different. And I feel like when you leave here, you kind of feel like you're leaving with a little piece of Bob," explains Cedella.

She used her visit to London to go to her father's 1970s home at nearby Oakley Street in Chelsea, where he stayed while recording music.

"I have never been there before, so it was my first time," she said. "Daddy used to live in that place [...] I can see why because the park is just across the street, so he could play football and just go back to jamming."

She left the experience feeling particularly pleased its capturing of her dad's love of sport.

"Really beautiful pictures of daddy playing football," she says. "It's very sensory. That was the aim and I think we have done it."

Bob Marley's influence is boundless and continues today from politics to art and, of course, his music.

Marley's 18-year-old grandson Saiyan said London must have been special to Marley as he chose there to get away after an assassination attempt.

"I feel like every year I just learn something new about him," he says.

"I just want to carry his legacy, and hold it down for gramps, you know."

The 'Bob Marley: One Love Experience' isopen at the Saatchi Galleryfrom 2 February - 18 April 2022.