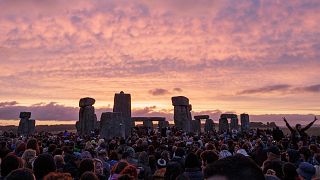 The famous stone circle of Stonehenge in the English countryside is an instantly recognisable prehistoric monument and a UNESCO World Heritage Site.

Ancient humans first began building here around 5,000 years ago - the stone circle was erected in the late Neolithic period, around 2500 BC.

But many of its secrets have been lost over the centuries. Who were the people that built it? What was it for?

A new exhibition at the British Museum in London aims to dig a bit deeper into those mysteries.

Bringing the true story of Stonehenge into clearer focus

'The world of Stonehenge' brings together 430 objects, including standing stones from other places and objects used by the people who lived around the time the monument was built.

"In the exhibition, we explore the history of Stonehenge, we pull apart the different periods in which it was built and modified, and what we show is that there was no one Stonehenge. There were many different monuments that meant different things to different people at different times," says Dr. Neil Wilkin, an expert in Early Europe at The British Museum and lead curator of the exhibition.

Of course, Stonehenge itself remains in place at its site in Wiltshire. So the exhibition relies on other objects to tell its tale.

This includes the so-called 'Seahenge', a timber circle found buried on a beach in Norfolk and erected around the same time Stonehenge was built.

There was some controversy when the decision was taken to remove Seahenge from its location, but its appearance in the exhibition gives another insight into how people at that time lived.

"What's astonishing about Seahenge is its survival. So we know from dating the wood that it was constructed in 2049 B.C. in the spring or summer. So it's over 4,000 years, and yet the bark and the wood feel as if it might have been made not so long ago, maybe a year ago. It feels so fresh and urgent," says Wilkin.

"And the monument itself at its heart had this upturned oak with its roots pointing up towards the heavens. And we think that's probably a way in which people tried to bring the underworld, the other world, to the surface so they could communicate with the gods or the spirits."

What other objects are on display?

Other objects in this exhibition include stone axes from the North Italian Alps, spectacular gold jewellery and astonishing examples of early metalwork including the Nebra Sky Disc – the world's oldest surviving map of the stars.

The Nebra Sky Disc was made using gold from Cornwall and bronze from central Europe. It was found in Saxony-Anhalt, Germany.

Like Stonehenge, it could position the rising and setting sun, and Wilkin certainly sees its "star" value.

"It's decorated with stars and the crescent moon and the full moon, and it's the first depiction in human history of celestial bodies, in this case the Pleiades constellation, sometimes called the Seven Sisters. That group of stars was very important to early farmers because the appearance and disappearance of that cluster of stars is often taken as a way of signaling the beginning and end of the farming year," he explains.

Another highlight of the exhibition is a 5,000-year-old chalk drum, considered one of the UK's most important archaeological discoveries in 100 years.

You can find out more about this recent discovery here.

An insight into the beliefs and rituals of Neolithic people

The British Museum and Stonehenge are almost 90 miles apart.

But custodians of the prehistoric site think the exhibition will tell people about the stone circle and much more.

"I think they're demonstrating pre-history in general, but they're using Stonehenge as a sort of gateway because it's so iconic and a lot of the things do relate to Stonehenge. But I think it's going to give us a fantastic insight into the fact that those people, in a way, were just like us, but they just had different technologies," says Heather Sebire, senior property curator for Stonehenge at English Heritage.

"We hope that by going to the exhibition, people will want to come and see the real thing and we look forward to welcoming them when they do come."

'The world of Stonehenge' opens on February 17 and runs until 17 July.