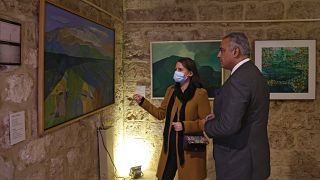 A restored collection of paintings at the Beirut Museum of Art hopes to inspire a revival of arts and culture in Lebanon after the devastation of the 2020 port explosion   -   Copyright  Anwar Amro/AFP
By Theo Farrant  & AFP  •  Updated: 21/01/2022

Art once destroyed by the Beirut port explosion of 2020 is back on display at the Beirut Museum of Art, as a result of a UNESCO restoration initiative.

The collection features 17 restored paintings, all of which were created by Lebanese artists.

Michele Haddad, the director of the Beirut Museum of Art explains that "most of the paintings were torn so the team working on the restoration had to work with precision".

The explosion which left Beirut in ruins

The catastrophic explosion in Lebanon's capital city on August 4 2020, occurred when 2,750 tons of ammonium nitrate stored in the customs area at Beirut's port district exploded.

The explosion caused 218 deaths, 7,000 injuries and extensive damage over much of the city.

The blast displaced 300,000 people and caused widespread destruction and devastation.

It is considered one of the most powerful artificial non-nuclear explosions in history.

Reviving arts and culture in Lebanon

The blast tore through major art galleries, including the Marfa Gallery and the Galerie Tanit, and many other beloved cultural sites - damaging buildings up to 20km away from the port.

The restored collection at the Beirut Museum of Art features work from Paul Guiragossian, Hussein Madi and Jamil Molaeb.

The director of the UNESCO Regional Bureau in Beirut, Costanza Farina, stresses the importance of reviving art and culture in Lebanon.

"This exhibition is a miracle and I hope many other partners will be inspired to invest on art, culture and cultural heritage," she explains.