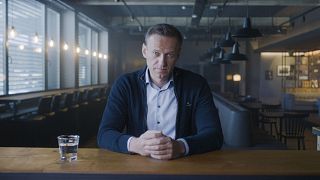 A top-secret documentary about alleged Russian novichok victim Alexei Navalny featured as a last-minute addition to this year's Sundance Film Festival on January 25.

Titled 'Navalny', the 90-minute documentary airs at a boiling point for the imprisoned dissident, who has been behind bars since February 2021 and was recently added to the country's registry of terrorists and extremists.

The collaboration between HBO Max and CNN Films follows the 45-year-old politician's journey since falling ill during a flight from Tomsk to Moscow in 2020.

Navalny was placed in a coma for several weeks after the attack with suspected Novichok poisoning, later confirmed by German authorities when he was evacuated to Berlin.

He went on to assert that President Vladmir Putin was responsible forhis condition and that his screams – widely filmed and distributed by fellow passengers – were not from pain, but from the sincere belief he was going to die.

The real-life political thriller, directed by Canadian Daniel Roher, paints a tense picture of democracy in Russia, tracing the events leading up to Navalny's unexpected return to Moscow last year.

Critics present at the virtual festival say the shocking addition to proceedings contains "unbelievable spy-movie" elements, defining it as an "an agent of history."

NAVALNY: Toronto's Daniel Roher brings a late add to #Sundance and it's a stunner: a fly-on-the-wall doc about Alexei Navalny, the Russian opposition leader, anti-corruption activist & thorn in the side of Vladimir Putin. Fearless, charismatic, an agent of history. #Sundance2022pic.twitter.com/Jvj8W8lIfF

The film's beginnings came when – before his imprisonment – Navalny and his team partnered with the data investigative journalism outlet Bellingcat as well as other international news organizations, including CNN, to investigate his attempted assassination and find proof of the Kremlin’s responsibility for the attack.

President Vladimir Putin immediately cast doubt on the findings and denied any involvement.

“We are delighted to have Navalny at this year’s Festival,” says Tabitha Jackson, director of Sundance 2022.

“When we saw this film in the early fall we all immediately knew that we wanted it and would wait for it: riveting cinema in the present tense, incredible access, intrepid investigative journalism, a compelling protagonist speaking truth to power - all beautifully edited, directed and produced into a timely non-fiction thriller that deals with the highest of stakes for freedom of expression.”

Director Daniel Roher commended Navalny's "extraordinary courage" in trusting him with his story as he continues to fight for freedom.