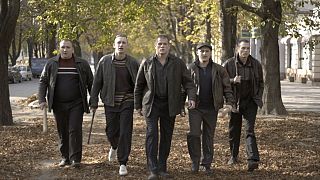 Activist and filmmaker Oleg Sentsov called for a fairer justice system in Ukraine as he premiered his first movie since he was released from a Russian jail in 2019.

‘Rhino’ premiered at the Venice Film Festival, and is a violent portrait of a young man who rises to become the leader of a gang in 1990s Ukraine when corruption and the criminal underworld filled a power vacuum created by the collapse of the Soviet Union.

Sentsov, who was tortured and then jailed by Russia on terrorism charges, says Ukrainians are still suffering from those years.

“We’re still furious," Sentsov told Euronews at the festival, and we still have these terrible problems from the corruption that spread everywhere during the 1990s, and it’s very hard to fight it. So, the main problem is that we didn’t have a main institution or a fair justice system, and so it’s hard to get it in Ukraine. We still demand from our President and from the current government to establish a justice system, it’s crucially important in terms of fighting the corruption.”

Asked whether he sees signs of change under President Volodymyr Zelenskyy, who swept to power on an anti-corruption platform in 2019, Sentsov replies that ‘it’s going in the right direction.’

“The difference between now and the time of when the movie was set is really profound. It used to be physically dangerous to walk on the street, and now you feel pretty safe, it’s changed. We really need to establish rule of law though, and human rights should be top of our priorities, so it’s something to work on. But I think it’s going in the right direction.”

The director also claims there’s a connection between the characters in ‘Rhino’ and former Ukrainian President Viktor Yanukovych, who was ousted in 2014.

“Twenty-five years ago, the growth of the criminal world was huge, after the fall of the USSR. President Yanukovych was the same kind of ‘Rhino’ from this world, he was our President who did terrible things. Because we realised he was a criminal, we rose up and deposed him. And now it’s a long road to change, but we’re doing it.”

Sentsov was born in Simferopol, Crimea and was acclaimed in 2012 for his first film, ‘Gamer.’ After becoming an activist following the Russian annexation of his native region, he was sentenced to 20 years imprisonment for alleged terrorism offences but released after five years following a global campaign for his freedom.

During his sentence, his film ‘Numbers’ was directed remotely by Sentsov, and he says that planning ‘Rhino’ also helped him through his imprisonment, although it had been written before he was jailed.

“The first two years, I was held in a small cage, where I didn’t see anyone, after that I was labouring in the north, where ten months of the year is winter. It was a horrible thing,” he says. “But I just always thought about cinema. Because in prison, you have one thing most people are short of in this lifetime: time. Time is heavy on my hands and I had twenty years ahead of me. I read and I wrote a lot – novels, short stories, plays - and it was the only way to save my mind and my discipline. I said to myself, ‘I am in prison – this will be a long story.’ But I was a man who was free, is free and will be free.”

The lead role in ‘Rhino’ is played by Serhii Filimonov, an activist and former soldier who was discovered during a casting call of 700 ex-convicts, military personnel and athletes, as Sentsov felt no actor would have the necessary qualities to play the part. The rest of the cast are professionals.

“I wanted to show that world how it is,” he says. “I don’t like the character of Rhino. I’m not like him, I wasn’t a criminal, I’m not violent, I want to show how that world is and to show young people that it’s not cool, it’s not fun. But every man has some bright spot in his soul and I believe anyone can change, anyone can be redeemed.”

Sentsov says he just wants to focus on filmmaking in the future and has plans for an English script with American actors. He says he’ll celebrate the anniversary of his release each year.

“It was the second anniversary on September 7,” he says. “When I left prison, I said I only now want to do two things: cinema, and life.”