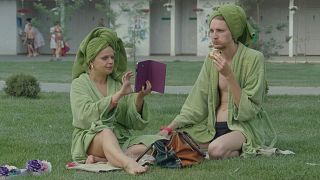 Still from 'My Thoughts are Silent'   -   Copyright  courtesy of Takflix and The Ukrainian Institute
By Paul Stafford  •  Updated: 30/11/2021

The Ukrainian Institute London, in partnership with Cambridge Ukrainian Studies, is screening a series of contemporary films about diverse aspects of life in modern Ukraine, under the title ‘Freedom on Screen’.

In its third year, the film festival, which is supported by the Embassy of Ukraine to the UK, combines in-person screenings in London with free online streaming via Takflix, a nascent streaming platform dedicated to Ukrainian cinema.

A mixture of narrative fiction and documentary films, emanating from the brightest minds in the country’s resurgent creative industry, offers fresh perspectives on the current state of the nation.

The result is an illuminating examination of a country with surprising depth and complexity, forced to examine its values, loyalties, and place in the world by the shifting tides of geopolitics.

Resilience in the time of crisis

“Ukraine has been left out of cultural canons because it has always been subsumed into Russian and Soviet narratives, but it really has got its own story to tell,” says Maria Montague, Deputy Director of the Ukrainian Institute London.

One particular highlight is the documentary ‘Ivan’s Land,’ a debut by director Andrii Lysets’kyi, which follows a whimsically eccentric Ukrainian folk artist named Ivan Prykhodko as he expresses himself creatively in and around his rural home.

“It’s about the simple joys in life and the importance of sincere, generous connections between people,” says Montague of the film’s underlying message.

Watching an aging folk painter stroke his kitten with a spring of grasses, or explain the challenges of using acrylic paints on a chicken, is something the world needs more of. But there’s also a deeper conversation about modern Ukraine happening here too.

When his artwork encounters interest from Kyiv’s top art curators, Prykhodko rubs up against a modern, upwardly mobile urban society with all the humour and incongruity of a Ukrainian Crocodile Dundee.

At one point in the film, Prykhodko states "my art is a protest against the extermination of Ukrainian culture." There’s a dogged resilience in those words that underpins all of the films on show.

The timing is not coincidental. In recent months, Russian President, Vladimir Putin, has regularly asserted that Ukrainians and Russians are “one people,” even claiming, somewhat paradoxically, that Ukraine cannot have true sovereignty unless it is “in partnership with Russia”.

However, the films on show at the Ukrainian Film Festival seem to suggest something quite different; a unique nation that, although sharing many values with Russia, contains plenty of its own distinct flavours.

“The flourishing of the Ukrainian film industry is reflective of a broader cultural revival which has been happening since 2014 in Ukraine,” explains Montague of the direct relationship between the Euromaidan and the growth of artistic expression.

While the film industry may have been kick-started by the polarising force of war, what is shown on screen is surprisingly unbiased. The films depict a nation of people coping, surviving and enduring; their lives ripped from normality by an always unseen (there’s not a single scene of military combat to be found throughout the festival) but often overheard fog of war.

Caught in a loop

In that space, the filmmakers are able to examine the country's great complexity. For example, in ‘Bad Roads’, written and directed by Ukrainian playwright Nataliya Vorozhbyt, the impact of war is explored from different angles over four short stories, all set in Donbas.

“Bad Roads,” says Montague “shows the impossibility of making choices in wartime and how people get brutalised by the conditions of war.”

In the final story, a woman arrives at a farm to apologise to the couple living there for having accidentally run over their prize chicken. While resigned to this sad fate at first, anger and resentment soon well within the couple, who demand an ever-increasing compensation. This mutation of grief into vengefulness, which threatens to perpetuate the cycle of anger, leaves viewers with an important question to ponder: What is the lasting damage of war that exists beyond the death count and damaged infrastructure?

Artful, often mesmeric, shots of goose-stepping soldiers or a sea of fatigue-clad officers shouting “glory, glory, glory,” which are among the festival’s most visually stunning moments, belong to ‘This Rain Will Never Stop,’ a documentary by Alina Horlova.

It follows a Syrian war refugee who settles in the Donbas, only to be dragged into another war. As he travels along the front line, delivering aid for the Red Cross, the camera often rests on his face, perpetually expressionless but masking an inner turmoil.

Conflict fatigue blankets it all.

But throughout this and the other films on show, there is hope. Sometimes it’s subtle or difficult to spot behind the poker face of a victim. At other times, it’s comic and wildly optimistic. Often it is shadowed by futility.

‘My Thoughts Are Silent’ best encapsulates these contradictory forces, and thus perhaps best sums up the state of Ukraine through a filmmaker’s gaze, as we follow 25-year-old Vadym, driven reluctantly by his mother, on a quest to record the song of a rare bird in the Carpathian Mountains.

Success would mean a chance of escaping Ukraine for a new life in Canada. All his mother wants is for him to settle down. Is running away the answer? Is conforming? Can the two opposing forces be reconciled?

Perhaps there is no clear answer. What is certain, though, is that these films illuminate a Ukraine that is rapidly changing, forced to adapt, to reflect, and ultimately to define itself. They depict a nation often at odds with itself, but ultimately one where its polarising forces are weaker than those that keep it together.

All films mentioned above are available to stream online for free to residents of the United Kingdom via the Ukrainian Film Festival’s website until 6th December 2021. Outside of the UK, many of these films are available on the English version of Ukrainian streaming service Takflix.

'Freedom on Screen' runs until 6 December. Info and tickets here

‘My Thoughts Are Silent’ will be screened at Cine Lumiere in London to close the festival on December 6th at 8:30 pm, preceded by a drinks reception.