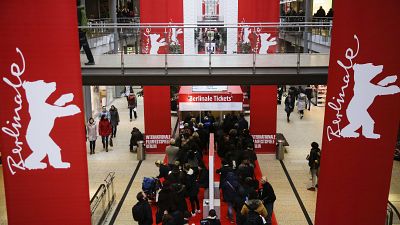 The festival went ahead last year in a stripped down format due to the pandemic   -   Copyright  Markus Schreiber/AP
By Tim Gallagher  with AP  •  Updated: 18/01/2022

The Berlin International Film Festival is going to take place in person next month despite rising virus numbers in Germany.

The surge in cases, particularly in the capital Berlin, has caused some concern but organisers want the festival to “send a signal” to the creative industries.

"We are aware of the challenges posed by the unpredictable course of the pandemic," the festival management said in a statement, adding that strict pandemic measures would be applied to the 72nd edition of one of the world's most famous film festivals.

"We want the festival to send a signal to the entire film industry, to cinemas and moviegoers, and to culture as a whole — we need cinema, we need culture," Germany's State Minister for Culture and Media, Claudia Roth, said.

"Of course, in today's times, this can only be managed with some painful cuts and with constant vigilance," she added. "The pandemic situation is dynamic, and the Berlin Film Festival is adapting to the resulting challenges."

Several measures have been implemented to mitigate the risk of spreading COVID.

Only people who have already been fully vaccinated against COVID-19 or have recently recovered from an infection will have access to the festival's grounds. In addition, a daily rapid test and masks will be required for everyone attending.

Movie theatre attendance will be reduced to 50% capacity and all parties and receptions — usually an essential highlight of the film festival — will be cancelled.

Last year's film festival was revamped due to the virus and split into two parts — one for the industry and one that screened movies during the summer.

What to look forward to at Berlin International Film Festival

The opening is still scheduled for February 10 and the awards will be given out a little earlier than initially planned, on February 16, the German news agency dpa reported.

The festival's opening film will be "Peter von Kant" by French film director and screenwriter Francois Ozon. The movie is a free interpretation of Rainer Werner Fassbinder's film "The Bitter Tears of Petra von Kant."

The film, which stars Denis Ménochet, Isabelle Adjani and Hanna Schygulla, is part of the festival's international competition and will celebrate its world premiere on February 10, the organisers said.

The festival's jury will be headed by American filmmaker M. Night Shyamalan, and French actress Isabelle Huppert will be awarded an Honorary Golden Bear for her lifetime achievement.

"Huppert is one of the most versatile actors in the world and has played an impressive range of characters in almost 150 cinema and television productions," the festival management said.