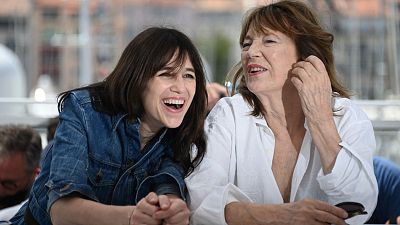 At 50, Charlotte Gainsbourg is the custodian of the memory of her family and their mark on French popular culture.

Her late father Serge, who died in 1991 when she was still a teen, remains one of the most important figures in French pop.

A new documentary seeks to explore a lesser discussed dynamic – that of herself and her mother, Jane Birkin – an actress, singer, and famed inspiration for the Birkin bag.

'Jane By Charlotte' feed the appetite of fans for a boundlessly successful family haunted by their ghosts.

The documentary, self-shot by Gainsbourg, first debuted in Cannes last summer and makes its wider cinema debut across France on January 12.

How did the documentary come to fruition?

The film came together as a result of Gainsbourg filming her mother in sequences over several years.

"At first, I didn't really know what I was doing," Gainsbourg explained last summer in Cannes.

"I did all this in a selfish way. I was looking for an excuse to get closer to her (...) and distinguish the public figure from the mother I love".

Birkin admits she had some reservations about her daughter's project at first.

"At the beginning, Charlotte arrived with a huge notebook, I was afraid of a (fight about) all the mistakes I made in my life, I freaked out", laughs Birkin, who ultimately admits having discovered her place in her daughter's life through this film.

The film, tender and introspective, will fascinate fans by showing Birkin's daily life in her house in Brittany, the passion shared with her daughter for dogs but also tackles the painful subjects of absence and illness.

Plans to transform their family home into a museum

One sequence in the film features a look at the former family cocoon of Gainsbourg on Rue de Verneuil in the 7th arrondissement of Paris.

The house looks like a decadent cabinet of curiosities, wherein nothing has changed: Brigitte Bardot's poster, the bathtub dominated by an imposing chandelier, even the cans in the fridge.

Charlotte intends to turn the creative lair of "Gainsbarre" into a museum, which should open in the spring.

It will be the 'Maison Gainsbourg', with a bookstore and a café / piano bar – the first cultural institution dedicated to this major figure of French music.

Until then, the pair wait for the world to experience their film – the reunion of a daughter and a mother whom life had pushed apart.

'Jane by Charlotte' is in cinemas across France from January 12. Further international releases are expected later in 2022.