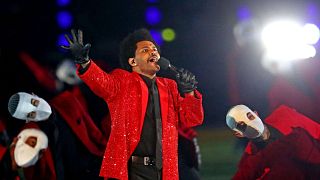 After two years of staggered album releases, 2022 feels like somewhat of a return to form for big releases that won't get pulled from under our feet.

Confirmed projects coming this year include the surprise unleashing of The Weeknd's latest work – coming on January 7 – to new guaranteed heartbreak from Japanese-American critical darling Mitksi in February.

It's a lot to take in. With such a promising calendar, future confirmations of long-awaited big releases from the likes of Rihanna and Arctic Monkeys also have fans foaming at the mouth this year.

Here's an up-to-date guide of what to expect from all of music's most-anticipated albums in 2022.

What to expect: The adjoining album to 2020's dark and cosmic journey 'After Hours'. You know, the album responsible for producing one of the biggest songs of the millennium so far. More grooves, more experiments, more delusions of grandeur delivered with the slyest of grins.

What to expect: Twigs' fascinating brand of avant-pop is back. The nostalgically titled Capri Sun' paves the way for a much-needed fresh chapter, marked by 'Tears in the Club', the mixtape's lead single, featuring none other than our above friend The Weeknd. It's the sound of a woman stepping out of a tumultuous chapter and seeking pleasure again. An all-or-nothing affair we hope seeps into the rest of the music.

The Wombats - Fix Yourself, Not The World

What to expect: The kind of bouncy, introspective rhythms that got this trio of Liverpudlians TikTok famous 19 years into their career. Teasers so far – aided with production from pop-rock god Mike Crossey (The 1975, LANY) and old collaborator Jacknife Lee – suggest more of the same, with an added pandemic-induced layer of nihilism for good measure.

What to expect: Cat Power – real name Chan Marshall – is no stranger to putting together agonisingly beautiful covers of some of the world's most famous songs. She did so with grace and splendour back in 2000 through 'The Covers Record', an act of defiance against her growing success. Stepping back into that world leads to poignant, achingly composed covers of Frank Ocean, The Pogues, and Nick Cave.

What to expect: In the words of the rapper himself: "a humble offering of 10 songs recorded in the wake of the worldwide coronavirus pandemic and its subsequent lockdowns", leaning into the madness, restlessness, and anger felt by many of us. 'Sick!' also marks Sweatshirt's first release under his own label, Tan Cressida, opening his raw and punctuating rhymes up to multitudes of possibilities with this renewed creative control.

What to expect: An indulgent, beautifully queer invitation to the dancefloor. We can't vouch for his personal life, but professionally, Olly Alexander had a cracking 2021. One of the year's most acclaimed performances leading Russell T. Davies' 'It's A Sin', becoming the bookies' favourite for the next Doctor Who, and transforming Years & Years from a band to a solo project pursue his creative vision.

What to expect: Buzzsaw synths and blissful catharsis from the Danish performer. 2018's 'Forever Neverland' flew woefully under-recognised beneath the radars of the world's critics, despite a tracklist fit the Grande's and Swift's that dominated the year. Could 'Motordome' be the work that sets MØ apart?

What to expect: The best metal bands keep evolving, but their essence never really changes. Whether this theory applies to Korn when they release their 14th studio album is a question that can only be decided by their fans. 'Requiem' is a body of work from a band that welcomed the world's COVID-lockdowns as an opportunity to create under no constraints. After a cryptic promotional campaign that featured secret billboards and Spotify playlist hijacking, who knows what will come from it.

What to expect: Only one of the most anticipated albums of the decade thus far. When news of a fresh Mitski release arrived last November, the internet's frenzied response (and accompanying Twitter countdown account) was astronomical. Yes, 2018's 'Be The Cowboy' topped masses of year-end lists at the time, but the work endured as an appropriate accompaniment to many of our lockdown woes. Longing to be soothed and anguished in short 3-minute intervals? Mitksi's your gal.

What to expect: In short, who knows? 2022 marks ten years since Alt-J released their debut, the Mercury Prize-winning 'An Awesome Wave'. The methodically synchronised patchwork of sounds captured the adoration – and indignation – of millions. Entering the world with such a comprehensive musical identity means each step forward is sort of a mystery. 'The Dream' is no different.

What to expect: Though short, this is the first new material from a GnR lineup completed by guitarist Slash and bassist Duff McKagan since 1993. Containing two original tracks and two live performances, it's bound to please any rock enthusiast still reeling from the energetic but confused dealings of the Axl Rose-led 'Chinese Democracy', now 14-years-old.

What to expect: Best known for floor filler 'Alors a danse', this purveyor of eclectic pop has been away from the music scene for so long that Google searches now implore you to ask if he is in retirement. In reality, the Belgian took some time away from recording and performing following a bout of anxiety induced by malaria medication. For this reason, it's hard to know what will come from 'Multitude', but our best guess is that can expect it to be varied and exciting. He returns with the same vigour amassed a decade ago with new single 'Santé', already clocking in 28 million Spotify streams.

What to expect: A completely wholesome affair from the vaccine goddess herself. When Dolly Parton isn't busy inspiring musicals, investing in Moderna, or running a theme park, she has taken to writing novels. 'Run, Rose, Run' is a 12-track musical accompaniment to her book of the same name, documenting a young singer-songwriter on the run to Nashville in search of success, with a little assistance from thriller writer James Patterson.

What to expect: You'd be stuck to find a contemporary pop performer that isn't inspired by Charli XCX's approach to songwriting. `So, ultimately, we expect excellent pop music. 2021 saw the 29-year-old veer away from the unconventional, PC Music-inspired palette of sounds seen on 'how I'm feeling now' and 'Pop 2' and into a more conventional – but by no means boring – chart-friendly recalibration. Anticipation has only been heightened by teases of collaborations with her "demonically talented” friends Christine and the Queens and Caroline Polachek on 'New Shapes'. After all, it's not a Charli XCX album without a line-up of modern music's radicals.

Watercolours painted by Prince Charles on display in London gallery