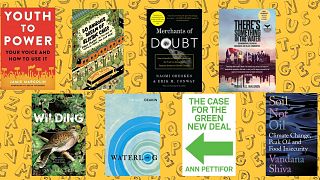 We might be a bit biased but we think books always make great presents. What better gift than the gift of knowledge?

Whether you are searching for something to pique the interests of the Greta Thunberg in your life or looking for a book to give a subtle hint to the climate uninterested, there is something out there. To help you out we have put together a few favourites, old and new, that our team have been reading this year.

So you don't feed the corporate greed of environmentally disastrous online retailers, we'd suggest you check out your local bookshop first to see if they can order in what you want. If not we've thrown in a link that might help you to find an independent online shop to buy from.

Check out our recommendations below. We won't judge if you decide to pick up a little Christmas gift for yourself as well.

An escape to nature

Wilding is the beautiful and practical story of how one couple gave their farm in the UK back to nature.

The experiment at Knepp Estate in West Sussex saw cattle, pigs, horses and deer allowed to roam free across the 1,400-hectare site.

Once industrial farming moved aside, extremely rare species of birds, butterflies and other species returned.

Isabella Tree captures her own and her husband Charlie Burrell's personal struggles alongside fascinating insights into the ecology of the British countryside.

Back in 1996, before wild swimming became the latest craze to sweep the nation, the late Roger Deakin set out to swim through the British Isles. This lesson in nature writing reveals how a country surrounded by the sea has become so detached from spending time in natural bodies of water.

More than just an account of Deakin's various experiences in lochs, lakes, rivers and seas, it is an emotional, compelling love letter to the natural world we so often take for granted.

The original book on wild swimming, Waterlog is now a classic but an ideal gift for anyone yearning to be in the great outdoors.

Hazel Press is a recently launched independent UK publisher focuses on the environment, the realities of climate change, feminism and the arts. It has recently put out three gorgeous pamphlets of nature poetry, one by Ella Duffy who we recently sat down with to chat about her work. Rootstalk is a single narrative poem about one of the world’s rarest plants, epipogium aphyllum - or the ghost orchid.

We're recommending Duffy's work as it was one our team loved, but anything from Hazel Press is a good read. Plus you get to support an independent business at the same time.

For the politically inclined

4. The Future We Choose: Surviving the Climate Crisis, Christiana Figueres and Tom Rivett-Carnac

The five year anniversary of the historic Paris Agreement is approaching. If the names on this book cover ring a bell it is because these are some of the people who were directly involved in making these essential climate talks happen.

Figueres and Rivett-Carnac offer this practical and optimistic counter to your eco-anxiety that is peppered with anecdotes about how the Paris Agreement happened. Ideal for anyone overwhelmed by the despair and anger around climate change that this year has frequently brought.

5. The Case for the Green New Deal, Ann Pettifor

You've probably heard the phrase 'Green New Deal' thrown about a lot this year. While the US election was in full swing, as countries sought to find a way out of coronavirus induced recession, it seems like something everyone is talking about.

But what does it really mean? Pettifor's book is a great place to start for anyone who wants to know more.

It takes a look at why environmentalists believe that our current economic system needs a massive overhaul to avert the climate crisis and how we could realistically fund it.

Christmas is usually the time when we are most likely to find our selves arguing about politics around the dinner table. Though we might not necessarily be together this year you can still try to convince your climate denialist relatives though the medium of literature.

Oreskes and Conway are two science historians who track the war on science from the lobbying of the tobacco industry to the role of right-wing think tanks in undermining climate science.

A section to take notes on is the one that examines how the media's obsession with providing balanced perspectives helps this misinformation to spread.

7. There's Something in the Water, Ingrid Waldron

This book takes a look at environmental racism and how pollution disproportionately affects certain communities. Waldron's uses Black Canadian and First Nations communities in Nova Scotia, Canada as a case study highlighting the grassroots activism that has provided solutions. It brings Canada face to face with its colonial past and how it has caused the erasure of marginalised communities in the environmental conversation.

The story has also inspired a Netflix documentary directed by Elliot Page that you can watch in that awkward period between Christmas and the New Year- but only once you have read the book.

8. Soil Not Oil: Environmental Justice in an Age of Climate Crisis, Vandana Shiva

As a champion of the small independent farm, Shiva connects the dots between industrial agriculture and climate change.

Looking at the potential for food production to solve poverty and biodiversity crisis at the same time the social activist gives a striking lesson about the politics of food.

One particularly memorable chapter challenges the Western obsession with the car, explaining how farms in India are being swallowed up to build factories and roads.

9. What Can I Do? My Path from Climate Despair to Action, Jane Fonda

Actor Jane Fonda has been involved with environmental activism since the 1970s. Last year, she partnered with Greenpeace for a series of weekly protests in Washington D.C. inspired by Greta Thunberg. Ultimately it resulted in her getting arrested four times.

Her new book recaps messages, speeches and teach-ins given by other environmentalists at her weekly protests illustrated with striking images. The 82 year old activist gives a number of pragmatic ways for anyone interested in fighting for our planet to get involved.

10. Youth to Power: Your Voice and How to Use it, Jamie Margolin

When we spoke to Jamie for EU Green Week, our entire team found her commitment to climate action compelling. The activist, co-founder of a global movement and NYU film student has been organising and protesting since she was just 14 years old.

Now she has written a book to pass on what she has learnt. From journalism to social media to event planning, Jamie gives her own insight alongside advice from other prominent activists. A must-read for anyone who wants a blueprint for what healthy, effective, intersectional environmental activism can look like.

How do we make our cities greener, cleaner and friendlier to alternative forms of transport?

To find out, Wilt conducted interviews with more than 40 different experts from academics, to journalists and community activists.

This book is about more than just climate change but looks at all of the factors that need to go into making the metropolises we live in fair and green for everyone.