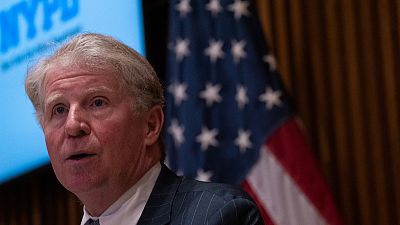 Two hundred archeological pieces valued at $10 million (€8.85 million) have been returned to Italy, a New York prosecutor announced on December 15.

Among the items were a ceramic vessel from the 7th century BCE called ‘Pithos with Ulysses’, and the terracotta face of a goddess entitled 'A Head of a Maiden' from the 4th century BCE.

Manhattan District Attorney Cyrus Vance said that 150 of the objects were related to his services' investigation of Edoardo Almagia, an Italian antique dealer who was based in New York before leaving the United States in 2003.

According to Mr. Vance, Edoardo Almagia has been investigated in Italy for trafficking and selling stolen antiques to American buyers, but remains at large.

The prosecutor added that 100 of the found pieces were seized from the Fordham Museum of Greek, Etruscan and Roman Art in New York.

"The repatriation of this dazzling collection of ancient art shows the need for all collectors and gallery owners to ensure that the pieces they have purchased have been legally acquired", said Vance.

The ongoing mission to return antiquities

These are the latest stolen works to be recovered by the New York attorney's office, with more than 700 archeological pieces having been repatriated to 14 countries since August 2020, including around 30 in Cambodia, more than 100 in Pakistan and almost 250 in India.

In early December, Mr Vance announced that famous American collector Michael Steinhardt had returned 180 works of art and antiques stolen from around the world in recent decades - some from ancient Greece - worth $70 million (€61 million).

This has allowed 80-year-old Steinhardt to escape indictment and trial for the time being, but bans him for life from acquiring antiques on the legal art market.

A combination of global, political and sociological factors have led to a widespread crackdown on art theft in recent years, accelerating the return of antiquities to their countries of origin.

Matthew Bogdanos, an assistant district attorney, has been leading the movement in New York, with a 14-person Antiquities Trafficking Unit that has seized more than 3,000 looted artefacts as of November 2021.

A key question that arises from cases of repatriated art is, why haven't any museum curators been prosecuted?

'The people that are handling these looted antiquities; the smugglers, the dealers, museum curators and museum directors, and often the purchases are sanctioned by the museum board. One reason they're not being prosecuted is because it’s very difficult to secure a conviction," says Lewis.

There's also some concern around the penalties for looting artefacts, with some people feeling that Michael Steinhardt's recent ban from buying more antiquities isn't harsh enough.

"I think there's a tendency to think, oh, well, we destroyed their business, that's enough of a punishment," says Lewis.

"One does worry that although Matthew Bogdanos is doing great work and catching a very significant number of these antiquities dealers, the number of crimes are outpacing his ability to catch the criminals."

Adidas takes a leap into the metaverse, with physical perks to boot