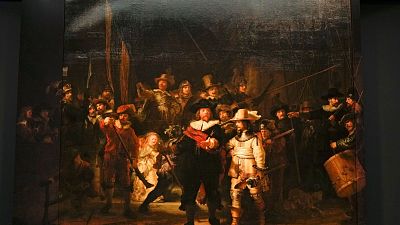 The Netherlands' national museum is planning to re-stretch Rembrandt's 'The Night Watch,' to get rid of deformations   -   Copyright  AP Photo
By Theo Farrant  & AP  •  Updated: 10/12/2021

Conservators at The Netherlands' Rijks Museum are making a landmark attempt to reduce the deformations of 'The Night Watch' by Rembrandt van Rijn.

The invaluable canvas will be removed from its wooden stretcher next month and placed on a new one to remove markings and creases in its top-left corner.

"The most urgent matter is the reparation of the deformations in the canvas," says Pieter Roelofs, the Dutch national museums' head of paintings and sculpture.

He explains the markings were formed when the painting was on display in the Phillips wing of the museum, during the renovation of the main building between 2003 and 2013.

Once the painting has been re-stretched, the museum will decide on whether further restoration work is needed.

Paintings now have the equivalent of anti-ageing serums

The oil on canvas painting depicts an Amsterdam civil militia and shows off Rembrandt's renowned use of light and composition to create a dynamic scene filled with characters.

The museum said the ripples were likely caused by "excessive climatic fluctuations in the gallery" where it hung during the rebuilding work on its landmark home in Amsterdam.

The painting has undergone many restorations over its lifetime.

It was placed on its present wooden stretcher in 1975, which is believed to have not helped matters.

Efforts to transform the artwork back to its original state will involve removing it this stretcher and replacing it with a new, non-reactive frame.

The announcement came as the museum rounded off a long and minutely detailed scrutiny of the painting using a battery of high-tech imaging technology, including scans that revealed a preparatory sketch of the work underneath the paint.

Watch the full interview with Petria Noble, Rijksmuseum's Head of Paintings Conservation, in the video player above.

Lyon sparkles as traditional Festival of Lights powers up