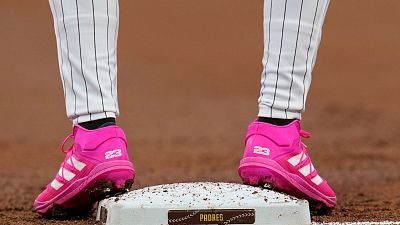 Adidas will provide clothing you can purchase via bitcoin to wear in a digital Windows game   -   Copyright  AP
By Shannon McDonagh  with AFP  •  Updated: 16/12/2021

Sports giant Adidas is stepping into the world of the metaverse by launching its first collection of NFTs.

From Friday, the Adidas Originals brand will market NFTs that can be purchased in cryptocurrency, which will initially give "exclusive access" to digital accessories that can be used in the Windows video game The Sandbox.

Debated as fads or the future at a time when online communication is a fact of life for many, Adidas is stepping into virtual spaces.

The metaverse is "the vanguard of creativity," says Erika Wykes-Sneyd, Vice President of Marketing and Communications for the brand.

She says it is "natural for Adidas Originals to enter".

Would you buy a digital sweatshirt for €700?

Related physical products, such as sweatshirts, for example, will also be available for sale for members of this restricted club who acquire thee NFTs for 0.2 ETH (Etherum, or nearly €700) each.

The 'metaverse', a contraction of meta-universe, is a network of interconnected virtual spaces, described by the likes of Mark Zuckerberg as the future of the internet.

Zuckerberg's convictions are so firm, he opted to rename Facebook to Meta last October.

Big brands' interest in the metaverse is more and more marked since Facebook announced that it wanted to make this space its new business project.

Almost unknown a year ago, NFTs are certificates of authenticity and ownership based on 'blockchain' technology, a tamper-proof system that also authenticates transactions.

For some, they represent the new goose that lays golden eggs on the contemporary art market, and in a few months have become essential auction houses, reaching prices of several million dollars.

The record for a fully digital work was sealed by American artist Beeple with 69.3 million in March at Christie's.

Adidas is not alone in rushing towards this new digital horizon. Its American competitor Nike announced on Monday the acquisition of RTFKT (pronounced 'artefact'), a digital fashion start-up that also relies on the blockchain.

The French video game giant Ubisoft also markets NFTs, which, for example, allow a player to acquire a unique weapon or vehicle with its own serial number that can be used in a game.

For its arrival in the metaverse, Adidas has teamed up with respected names in the crypto community, such as the Bored Ape Yacht Club, one of NFT's largest collections, bringing together 10,000 "tokens" linked to unique images of monkeys and sold at over €175,000 per unit.