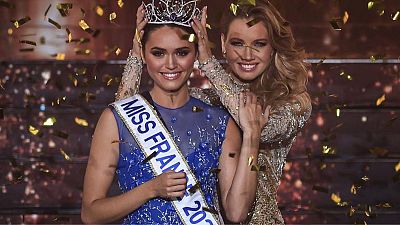 Miss France declared she was a feminist after being crowned - but is this statement at odds with the pageant world?   -   Copyright  Sameer Al-DOUMY / AFP
By Tim Gallagher  •  Updated: 15/12/2021

Wishing for world peace is the traditional reference to global events at beauty pageants.

But in recent years bland platitudes about ending global hunger or teaching the disadvantaged to read have been replaced by remarks of a more controversial tenor.

This week, 24-year-old Diane Leyre - recently crowned Miss France - was greeted with incredulity in some quarters when she declared she was a feminist.

Miss France has been subject to criticism from some for its requirements that contestants be at least 1.70 metres tall, aged under-25, and single. These rules were described by the French Minister for Equality of Women and Men, Elisabeth Moreno, as "completely has-been".

The minister added her regrets that a widow or a woman who is already a mother cannot apply, and questioned, "Why shouldn't a Miss France be able to do irony, be a mother or pose topless to fight cancer?"

The latter in reference to a contestant who was disqualified from the 2020 pageant for doing just that.

This year's Miss Universe has also attracted controversy due to its location of Eilat, Israel. Some contestants, including Miss South Africa, were urged not to attend due to the Israeli government's treatment of Palestinians.

This leaves the question, in a world so polarised that everything becomes a political statement, can we really keep the politics out of pageants?

From swimsuit contests to diplomatic incidents

But in more serious cases geopolitics have played their part in pageant controversies.

Way back in 2006, disaster almost occurred when Miss Israel and Miss Lebanon were photographed socialising together at the Miss Universe pageant, during the Israel-Hezbollah war. A PR disaster was averted, but it was lucky for both beauty queens that it was pre-social media age and the issue could be controlled.

More recently, Miss Universe 2013, which was held in Moscow, caused a stir when the host country refused to invite contestants from Kosovo, a state unrecognised by the Russian government.

This event was further marred when gay US TV personality Andy Cohen refused to host the ceremony due to Russia’s anti-LGBT stance, and attracted further negative headlines when it became the focus of the Trump-Russia corruption investigation.

Elsewhere in South America, a diplomatic incident was caused in 2017 when a Chilean entrant in a beauty pageant in Bolivia announced ‘the sea belongs to you’. Her remarks were in reference to disputed ownership of the Pacific Ocean by the neighbouring states, an issue subject to review by the International Court of Justice at the time.

The power of the pageant

Not all political pageantry is gaffes and slip-ups though, and the contests can be used to draw attention to important issues, as candidates for the Peruvian entry to Miss Universe did in 2017.

At the point in the ceremony where they would usually recite their bust, waist and hip sizes, the contestants instead read out shocking statistics about violence against women in Peru, drawing attention to femicide and sexual exploitation in the country.

Similarly, when introducing herself at Miss America 2019, Miss Michigan drew attention to the water crisis in her home-state by saying, “From the state with 84 per cent of the U.S. fresh water but none for its residents to drink, I am Miss Michigan, Emily Sioma,”

On proclaiming she was a feminist, Miss France, who has a degree in international business, dismissed her critics, telling reporters: "As a woman, I want to show that you can be Miss France and a feminist."

“For me, feminism is deciding to do what I want."

So maybe pageants and politics aren’t so mutually exclusive after all?