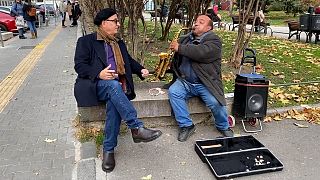 You are a Hollywood star and you have just celebrated your most-watched movie's 30th anniversary.

You have then crossed the Atlantic Ocean for a European vacation, and are taking a stroll around a new city. But wait. What's that sound? It can't be...

And so it came to pass that Hollywood star Andy Garcia stumbled upon a street musician playing the theme song of the movie franchise that made him famous.

Andy Garcia, the Cuban-born American actor and director who first rose to prominence in Brian De Palma's The Untouchables in 1987, starred in Francis Ford Coppola's The Godfather Part III (1990) as Vincent Mancini alongside Al Pacino and Diane Keaton.

Garcia received an Academy Award nomination for Best Supporting Actor for his performance.

In the 7 minute cut, Garcia walks the streets of the Bulgarian capital, Sofia, with his translator and assistant. And it's fortunate that he wasn't alone or the moment would not have been caught.

Garcia suddenly hears the theme to The Godfather being played by a Bulgarian busker. So he follows the music and sits with the street musician. His assistant takes out their phone and the rest is history.

Garcia sits down with him but, amusingly, the busker is not aware of the identity of his illustrious guest and continues to play Larry Kusik and Nino Rota's 1972 classic.

While Garcia enjoys the coincidental moment, the translator tells the Bulgarian busker that the man next to him is a Godfather legend.

The shock is palpable.

Garcia gives the musician a tip, the two salute each other and the film star walks away, smiling, with the dusky sound of the sax continuing the Godfather theme.

The video was watched by more than 100 thousand social media users in 2 days.

The name of the song is "Speak Softly, Love" but everybody knows it simply as "Love Theme from The Godfather".

Rota's score for The Godfather had been nominated for a 1973 Academy Award for Best Original Score. However, it was disqualified from consideration when the Academy learned Rota had used a more comedic version of the song for the film Fortunella in 1958.

Nonetheless, Rota's score for The Godfather Part II won the 1974 Academy Award for Best Score, despite the fact that it contained the same piece.

Ukrainian rapper-turned-soldier vents rage at war through his lyrics