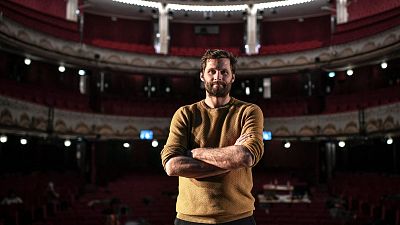 Alexis Michalik is responsible for some of Paris's most successful plays   -   Copyright  AFP
By Shannon McDonagh  with AFP  •  Updated: 02/12/2021

He has dreamed of this for more than fifteen years.

Alexis Michalik, a director with five Molières for the 2016 play 'Edmond', is bursting back onto the French theatre scene with 'The Producers', an adaptation of Mel Brooks' crazy musical comedy.

The most awarded Broadway show of all time is open at Théâtre de Paris from now until February 27.

Brooks' own stage interpretation of his eponymous film won twelve Tony Awards when it premiered in 2001 on in New York City, decades on from bagging the 1969 Oscar for the original screenplay.

What is 'Les Producteurs' about?

The film and the musical recount the wacky adventures of two crook producers determined to put on "the worst play possible with the worst comedians" as a way of scamming their financial partners out of $2 milllion.

In this case, a homage to Adolf Hitler. Much to the pair's dismay, the production goes on to become a smash hit as audiences assume it could only be satirical.

"The story of 'The Producers' is deliciously irreverent for a terribly funny and simply hilarious show. I said to myself that this totally crazy musical should be put on in Paris," explains Michalik.

"My mother is English and I grew up with an Anglo-Saxon culture. I was lulled by musical comedies. As a teenager, I also discovered the operettas of Francis Lopez and the films of Jacques Demy," he adds.

With 'The Lion King' back in Théâtre Mogador, this show found its home at the grand Théâtre de Paris.

Adapting American comedy for a French audience was a unique experience

"We negotiated with the Americans for a new staging in French, which is different from a franchise show. With Nicolas Angel in charge of the adaptation, the whole troupe took part to find the best punch lines," says Michalik.

This production fulfils their promises by offering two hours without a single downbeat moment.

Its quality was enough to even get the green light from Mel Brooks himself.

"He understood that I wanted to do a show adapted to a French audience while respecting his work. I hope he can come to Paris to see the result, but he is 95 years old."

All exuberant, the characters are encamped by a troop of 16 actors and singers, with lines as tasty as they are sarcastic. An orchestra of seven musicians finishes the mood off.

"I am the first demanding spectator of my shows", adds Alexis Michalik.

"I like all forms of theater, with the most diverse audiences who will in turn recommend the show. With 'The Producers' I'm bringing a bit of Broadway to Paris."

'The Producers' runs Tuesday-Saturday at 8 pm with a 4 pm matinee every Saturday and Sunday from now until February 27. Tickets can bepurchased herefrom €25.